Melon Optics are a small brand, run by a Brit, initially to fund his summers surfing in Bali and winters shredding in Japan. But where most brands will charge a fortune for a pair of goggles, when in actual fact it’s more for the logo you’re wearing on your temple, these guys have hit upon a few simple designs that won’t break the bank, especially if you’re after multiple straps or replacement lenses.

They’re also customisable – on their website you can buy premade designs or customise unique colourways ways picking your favourite strap, frames and lenses from a decent selection.

New for 2017/17, they’re extending their Carl Zeiss collaboration from their line of sunglasses into their goggles, as well as introducing their take on the latest spectrum enhancement technology, which they’re calling ‘Sonar’. Great stuff from an exciting British indy brand, scroll down to have a peak at what’s in store for next year. 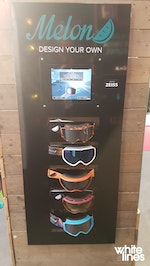