Dinosaurs Will Die have been doing a rad range of punk-rock inspired snowboarder’s snowboards since inception in 2004 – and true to form, their 2017/18 selection has a bunch of guest graphics and pro models that pay tribute to the people that make things happen on the mountain year-in year-out.

The Genovese in particular has six different guest pro model graphics assigned to the diggers that help keep parks prime throughout the winter – each with its own backstory and specific size to go with; while the Kwon has four completely different Jesse Williams graphic colourways on an Action Camber blended-profile whip.

Also look out for the unmistakeable Pow Reaper outline, a new shape for the Brewster, and the return plenty of favourites – here’s a small taste of what’s to come. 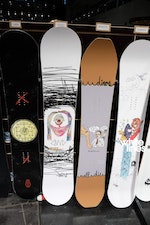