Published by Will Sleigh

Salomon Snowboards have been at the top of the game for a long, long time. With a global team that stacks legendary riders like Bode Merril, Jed Anderson, Chris Grenier, Wolle Nyvelt, Louif Paradis, Annie Boulanger, Josh Dirksen and Desiree Melancon, you can rest assured the product you’re interested in is endorsed by the best of the best.

Salomon’s tag line this year looks to be along the lines of ‘face shots for all’ but they have you covered for anything you could want. Whether you’re after backcountry booters, charging groomers, stacking sunny park laps or chasing urban blizzards, Salomon snowboards won’t let you down.

The Salomon Villain is the brain child of urban destroyer Louif Paradis, featuring artwork from Dave Banks. With a flat section between the bindings, camber under the inserts and rocker out towards the nose and tail, this board has the perfect balance of flex and response.

The Salomon Assassin for 2016-2017 is his master’s board. That master is Wolle Nyvelt. A cross between Salomon’s most progressive powder and freestyle board constructions. The Assassin built with an arsenal of technology for destroying anything in it’s path and when Wolle is strapped in, he takes no prisoners.

Last but by no means least is the new Ultimate Ride. The name says it all. This one is built to handle everything the snowboarding world has ever discovered. From Alaskan spines to the humble streets and everything in between, this board is a truly one-of-kind quiver killer designed by Bode Merrill.

The Salomon Craft is the perfect board for all your freestyle needs as you venture further into the backcountry. The board of choice for Nils Mindnich is equipped with rock out camber to give you great edge control with easy presses.

The Salomonder continues it’s evolution into two separate board shapes for the second year, it looks like Jed and Chris aren’t as aligned as they once used to be when it comes down to their choice of jib stick. Jed’s pro model runs with a blunter nose and tail in a 148 or 154 length, while Chris keeps his Slash-esque shape for super fast spin weight and jibbery in the 145, 151 and 156 lengths. This was always a classic, now it’s double classic.

New for 2016-2017 is the Huck Knife, a classic camber park board with the tried and tested blunt shape. Fully backed by Hans and Nils Mindnich, if hucking off kickers and slicing your way though park lines is your jam, this is the perfect board for you.

Another new board for 2016-2017 is the women’s Rumble Fish. An all mountain quiver killer for the type of girls who never let their line get poached. Similar to the Salomon Assassin this blends Salomon’s most progressive powder and freestyle board constructions. This board rules them all.

Salomon’s mid-range boards are like top of the range boards from anywhere else. There’s a whole load of tech, developed for the newer boards in the line-up that finds its way into these boards, so you’ll save your pennies but not at the expense of quality.

The Lotus had a makeover for 2016-2017 and now features a flat-out camber and bite free edges for low consequence, creative and fun riding. Perfect for the ladies chasing powder and groomers.

The Oh Yeah is another women’s specific, true twin freestyle snowboard that won’t break the bank.

The Salomon Pulse is the men’s version of the very similar Lotus, with flat out camber for easy turn initiation and bite free edges to inspire confidence in your riding.

The Sight is a cross profile camber and rocker snowboard which excels in powder and on the early morning groomers.

Finally the Sanchez, a super fun, skate inspired rocker snowboard that’s easy to press and really forgiving. You can ride this one a little shorter than you normally would thanks to the Rocket Science which makes the profile slightly shorter and wider.

The Salomon Man’s Board is an ultra-light cross profile camber and rocker for all out charging everywhere on the mountain. Built for speed, this board really does separate the men from the boys. You think you can handle it?

The Wonder is the go to board for all round good times in powder and fast groomers, but if rails and jibs are more your thing take a look at the Gypsy – Desiree Melancon’s ride of choice – which will help anyone to take their park skills into the streets.

The Super 8 is inspired by Wolle Nyvelt’s surf style and Josh Dirksen’s next level edge control. This beast of a snowboard combines backseat camber for extra power and control on the back foot with Rocket Science for a wider and shorter shape, giving loose and wild maneuverability.

The Salomon Premiere is an award winning splitboard design which, unlike traditional splitboards is made up of a four part design. You can tuck two pieces of the centre up into your backpack for even faster touring in the backcountry. 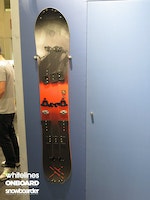 Based on the legendary Sick Stick, cut in half and sewn back together, this splitboard is a classic two part board with a modern shape and superior performance. You’ll get custom cut skins if you pick this one up. 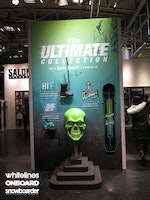 Bode Merrill’s ultimate setup. Board, boots and bindings all perfected for his craft. Buy this trifecta of awesome-ness and you’ll be sending one footers at HCSC summer camp like you won’t believe.

The Ultimate Ride up close in all it’s glory.

Salomon don’t slip at bringing the stoke to the young guns either, they have a fully dedicated line up of kids boards for 2016-2017. Grown up technology shrunk down to fit a small and lightweight package perfect for the up and coming mini shredders.

Spongebob is back with a vengeance.

One beast of a binding, backed by Wolle Nyvelt and Josh Dirksen, this is as responsive as they come. Strap into this bad boy and the Shadowfit technology and Defender Highback with never leave you wanting more.

If Jed Anderson and Louif Paradis are willing to strap their toes into this one, it should be good enough for you, and then some. Featuring a whole host of extra designs this year, we’re stoked all black villain graphic on the highback, this will look sick with the Villain snowboard.

Pick a pair, put your feet in, buckle up and enjoy the ride.

Northwave Boots | 2021-22 Snowboard Gear Preview
We use cookies on our website to give you the most relevant experience by remembering your preferences and repeat visits. By clicking “Accept All”, you consent to the use of ALL the cookies. However, you may visit "Cookie Settings" to provide a controlled consent.
Cookie SettingsAccept All
Manage consent