Level Gloves are the hand-clothes specialists, ploughing everything they’ve got into keeping your fingers warm, cosy and dextrous – not to mention looking pretty special. The staked team includes Gerome Mathieu, Mario Kapelli and Sarka Pancochova, and well as Brits Ayla Thidling and Aimee Fuller (the latter of whom now has her own pro model).

Their gloves feature Thermo-Plus technology, which is put through vigorous testing to ensure that the insulation holds up in even the most extreme weather. This year they’ve also embraced Near Field Communication (the same tech used in contactless payments), so you can use your smartphone via NFC tags in the gloves rather than having to take them off.

The range is massive, and with multiple colour options for each model, you’re bound to find a pair you like: 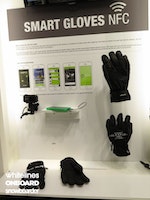