Nicholas Wolken (pictured) and Stephan Maurer love a powder turn, and developed a whole mess of snowboards designed to do just that.

As time went on, they tweaked their designs until they had a quiver of sticks that could handle hard-pack just as well as the soft stuff, If you share the boys’ ‘Yearning For Turning’ then Korua Shapes is a brand you absolutely have to check out.

This year a lot of things remain the same; the topsheets are white, the bases are red and the emphasis is still very much on the turn – hence the dramatically directional shape of every model in the range (with the exception of the Tranny Finder).

New developments include varying sizes for the classic models, a new camber profile, and splitboards. On top of that, every board features the name of the rider that inspired it, from Nicolas himself to ace photographer Cyril Müller.

Originally only available as a 163cm-long beast, the hard-charging Korua Stealth has been released in new lengths: 150cm and 156cm

The bases for all boards are still a vibrant red – get your Eurocarves low enough and you can show ’em to the world. 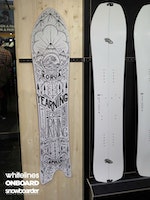 As much as we love the plain white topsheets, this jazzy version of the Apollo is pretty sharp. Anyone else yearning for turning?