Dragon is one of the biggest goggle brands in the business, and you can find a bit of everything in their 2016/17 line; a quick-change lens system, frameless models, varying sizes (smaller versions are identified with an ‘s’ in the title), and a dazzling choice of frame and strap colours. Some pairs also feature Transition lenses, which adapt to the light as it changes.

They continue to protect the peepers of Gigi Rüf, and you can see his signature colourway on the pair of X2 goggles below. Among those also covered are Danny Davis and Jamie Lynn (the latter of whom has been on the team since the very beginning.

Here’s a look at what’s coming next winter: 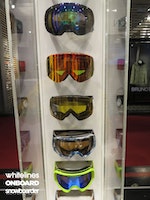