Going strong for over 25 years now – Nitro snowboards have a huge range of snowboards at their disposal, as well as a strong team and plenty of variety to choose from.

Freestyle specialist, the Afterlife features Nitro’s Cam-Out Camber profile, which gives you the snap and stability of traditional camber between the feet, and a smooth early rise in the tip and tail. It’s teched out with rail ready edges, and features a twin shape, and flex that makes it pressable despite its profile.

The Cinema is designed to be a piste/park stick, with affordable tech as well as Nitro’s premium extruded base. It’s twin in shape, and the Gullwing Rocker profile and softer flex promise a forgiving ride while your learning new tricks.

This year’s Quiver comes in collaboration with the fine folks over at Poler, and once again aims to provide a set of boards that’ll tackle any snow depth or condition. So whether you’re after for a quick tree turner or a big mountain burner, chances are there’s a shape for you here…

This year marks Eero Ettala’s 11th pro model snowboard with Nitro, and being the boss that he is, Eero also gets his signature logo put to a fresh pair of Phantom bindings and Team boots too! You can guarantee some of Nitro’s most high end tech will be going in to make these all perform whatever the terrain…

New for next season, and packing a punch, El Mejor TLS is designed to provide premium response and performance while making your feet as comfortable as humanly possible.

Air dampening and Vibram soles, an Ortholite footbed, and something called a Cloud 10 liner, are just a few of the features advertised, but don’t forget that 8/10 response rating if you’re new to the game and already looking to buy, these are all set to charge! 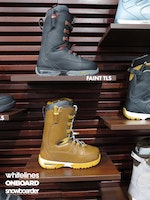 Filling a similar spot in the line up, but for the ladies this time, the Nitro Faint TLS is a high end boot with comfort and response going for it, as well as a sharp leather style design. Many of the features might sound familiar, a new Vibram Icetreck outsole, Cloud 9 liners, Ortholite footbed, but the overall flex is given as a slightly more forgiving 6/10. Silje Norendal is a new one on the Nitro team line-up, but as a regular face on ladies’ slopestyle podiums, she’s jumped straight in with a pro graphic – inspired by her Norwegian national dress no less…

The Mercy itself is a pre-existing weapon with Cam Out camber and a twin shape that make it perfect for powerful freestyle and resort riding.

Unless your an adamant social media avoider, chances are you’ve seen the whirlwind that is Marcus Kleveland, throwing nbd’s and more all over the internet. The kid’s on fire right now!

So Nitro have crafted him a weapon that not only handles monster kicker hits, but those knuckle tricks too! It’s made for slightly younger riders who also want to step up their chops in the same way…

Stepping up their women’s binding range with a new entry, the Nitro Poison is fresh for 2016-17, and has been built to provide a highly responsive ride, with dual air dampening, an asymmetrical highback and premium hardware all ’round…

Lightweight bindings, the Pusher are back for another year, built with a freestyle focus and enough tech to take all over the mountain.

Like death and taxes, there is always a snowboard with hot chick graphics going somewhere in the ISPO stalls. And this year Nitro take first claim with new board, the SMP. ‘Shaped for Good Times’ it’s a directional all terrain ripper made to blast and float through it all, with a surfy feel…

Whether you’re after a high-end splitboarding beast, or just a first taste of the more exploritory side of snowboarding, Nitro have you covered. The Doppleganger offers a directional speed demon, with lightweight tech throughout; while the Nomad is a Flat/Out rocker all terrain board that’s been designed to be the most affordable splitboard going.

You’d have a tough job finding someone who wouldn’t want Sven Thorgren’s trick book at their disposal… The dude’s always one to watch in big comps, as well as videos, and no doubt there are heaps of riders out there who take direct inspiration from it. His custom graphic sits atop a camber snowboard, with a Sintered Speed Formula II base and Railkiller edges, a proper freestyle weapon, just like the man himself…

Brandon Hobush’s horror movie graphic sits on top of a Nitro T1 that’s perfect for destroying park laps. Made to last with RailKiller edges that’ll survive many a knock, and a twin shape, this is a freestyler for sure…

Eyes are always peeled for what Nitro will do with their Team bindings. Last year they had a burger theme going on, and this year they’ve followed up with a rad skeleton/x-ray style going on…

Designed to be a versatile all-terrain ripper, they’ve got a new Stealth Air Base frame, and Asym Highback coming into the new season. 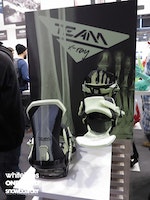 The Double Exposure graphics are looking rad on this selection, and the board underneath is sure to be a hit with trad camber lovers. The directional twin is designed to blast through all terrain, and has heaps of wide sizes up to 165 in width.

Nitro’s Thunder TLS are designed for premium board feel, impact absorbtion, and soft flexing support – definitely one to try if you find yourself needing high-end park performance…

Bryan Fox’s Venture TLS boots get a big ‘ol spotlight as a new boot for Nitro this year – and rightly so. Similar to the El Mejor, it’s built for comfort and performance, with Vibram Icetrek soles, Cloud 6 liners, and a highly responsive 8/10 feel.

Coming through with a rad Shaka design this year, the Nitro Zero is a freestyle binding with enough support for stepping up to bigger features, and a design that’s meant to be lightweight and comfortable. Fans of a skate-like feel should look this way…