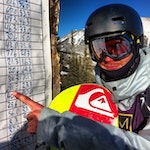 Competitive UK snowboarding doesn’t get much bigger than Billy Morgan right now. Even before he became an international Youtube star with his triple rodeo video Billy was firmly on the British scene’s radar, having rocked up to the Brits and beaten ‘the chosen one’ Jamie Nicholls in the big air in 2010.

Earlier this year he became the first Brit to land a triple cork, with this backside triple 1440, and with a string of impressive Olympic qualification results (notably a 4th in Quebec and a 2nd in Sierra Nevada) Billy has all but qualified for the games. He’s started this season equally well with two podium spots in an Australian WST comp in August: first place in big air and second in slopestyle against a strong field that contained Torstein Horgmo, Aleksander Ostreng, Emil Ulsletten and Stale Sandbech. Such is his current run of form that we wouldn’t be against him not only going, but bringing back some silverware for blighty.
But Billy is no contest robot – he getting involved in crazy stunts and good parties, and if he does well, it’ll be on his own terms. Have a look at how he’s be preparing for this winter in the latest episode of Diaries Down Under to see what we mean. Or just marvel at this video of his slopestyle triple from Oz: http://www.youtube.com/watch?v=sObhXrPVxVU

An epic 22ft halfpipe has mysteriously appeared in the Australian resort....

Our in-depth guide to the best boards you can buy this year.

In case you needed reminding why this man is one of the best riders in the world...

An epic 22ft halfpipe has mysteriously appeared in the Australian resort....

Our in-depth guide to the best boards you can buy this year.

In case you needed reminding why this man is one of the best riders in the world...

Behind the scenes of the new powder-focussed masterpiece.

DC Snowboards have some damn fine looking gear out this season

DC Snowboard Gear 2013-14: 6 Bits Of Eye Catching Kit
We use cookies on our website to give you the most relevant experience by remembering your preferences and repeat visits. By clicking “Accept All”, you consent to the use of ALL the cookies. However, you may visit "Cookie Settings" to provide a controlled consent.
Cookie SettingsAccept All
Manage consent