Setting up at the K2 test stand. Photo: Duthie

It may only be January, but we’ve already taken a peek at the 2017/18 season’s snowboard gear. Dozens of brands have just displayed their forthcoming wares at the Avant Premiere test in La Clusaz, France.

Looking at it all, it’s pretty clear that the current popularity of directional and volume-shifted snowboards is set to continue. Also, the majority of brands are playing it relatively safe in terms of graphics – there’s a lot less wild, out-there designs than in years gone by. Even Lobster have toned it down.

Another thing that’s hard to miss is the fact that the recent global trend for all things nostalgic seems to have permeated snowboarding too. It’s not just Burton revisiting of step-in bindings – they’re all at it.

It isn’t necessarily a bad thing – for every limp Ghostbusters reboot, there’s a Stranger Things – and it’s perhaps an inevitable consequence of snowboarding getting to a certain age. Still, for a sport that’s always prided itself on innovation, it’s slightly odd to see it dwell quite so much on the past. For the topsheet design of their Good Times snowboard, Nitro have opted for a sight that’s bound to trigger a disturbingly emotional response in riders of a certain vintage.

It shows a collection of VHS tapes, stacked high in their battered cases; classic Mack Dawg snowboard movies like True Life, Decade and Simple Pleasures are among those that make an appearance.

Expect the long-in-the-tooth among us to fawn over this one, even if most don’t actually want to return to a world of worn tapes, wobbly pauses, and ‘Be Kind Rewind’. 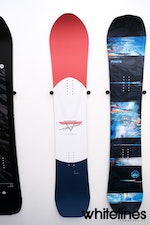 The SIMS brand was recently resurrected after years in the wilderness (caused by, among other things, a dispute with the makes of The Sims series of computer games. We’re glad they’ve finally sorted that out; if we had a quid for every time we’ve confused the two…) 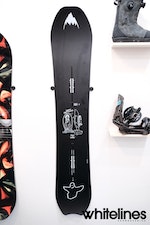 Gone is Danny Davis’ Easy Livin model, and in its place comes two different designs; the Free Thinker, and the Deep Thinker.

Both have topsheet art by influential skater-turned-artist Mark Gonzales. He, you might remember, also gave us the fantastic Michi Albin graphic from 2001 (the one with the glow-in-the-dark ghost, and Burton’s name spelled wrong).

That graphic is one of the B’s most fondly remembered, and they’re trading heavily on that nostalgia with Danny’s new boards. Even the ghost has made a comeback.

The NOW Brigade binding debuted this winter, intended as a tribute to founder JF Pelchat’s contemporaries in the pro snowboarding world, particularly those that dwelled in Whistler with him during his ‘90s purple patch. Indeed, there was even a Wildcats crew colourway.

It’s therefore a bit odd that the latest ‘Slob’ graphic for the Brigade seems to reach past the days of Devun Walsh, Chris Dufficy et al, and right back to the day-glo sights of the 1980s. 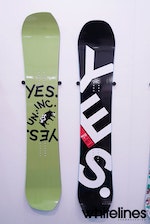 The YES Greats is a board we’ve always looked forward to seeing at Avant, as it’s where we get our first look of the latest graphic. Since its inception, the Greats has always been YES’ way of tipping the cap to those who deserve it; from Albert Einstein and JFK to Noah Salasnek and Jeff Anderson.

This season they absolutely nailed it with a design that references company co-founders Romain de Marchi, JP Solberg and DCP’s roots in Burton’s infamous UnInc program.

So what have they cooked up for next year? Essentially the same thing. It was clearly a popular choice, but we’d be stoked to see the Greats returning in 2018/19 with something fresh.