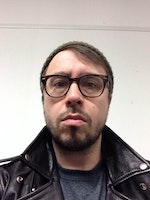 How did you come to design Lobster boards?
It started four seasons ago, when my art collective Kamp Horst was asked to design a Bataleon board. I got to know Danny [Kiebert, of Low Pressure Studio] and when the Helgasons approached him about starting Lobster, he approached me. I started with two limited edition boards, and they must have liked ‘em because they asked me back. Before I knew it I was doing the graphics for the entire brand.

When it comes to design, how much of a brief do you get from Halldor and Eiki?
It’s more or less 50/50 now. At the beginning it was 100% their ideas, and I just executed them. I would maybe do something a little different to what they asked, and we would go back and forth for a while. These days it’s a bit tougher for them to come up with so many outlandish ideas as they’ve got lots of other things on their mind, so I tend to come up with graphics on my own and present them. And if they’re into it, they’re into it. 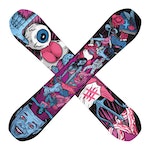 Is that what happened with this year’s Freestylebaord?
Yeah – the scissoring cats, the mummy eating ice cream, and the fat angel eating a hamburger were all things that they asked for. I did the puking fly, the girl with the fox head, the hairy girl and some of the other stuff.

So there’s no theme to it?
No. Sometimes they’ll have ideas that mean something, but at other times they just like to piece stuff together and see if it works or not.

What about the base?
That was one concern of Danny’s; usually brands want a super clear logo on the base, so you can see that it’s a Lobster in the shots in the magazines. But with this one I came up with the drawings in the shape of letters. Danny thought we should just go with a logo, but the Helgasons insisted. Some people get it right away, but for others it’s not so easy to figure out.

It’s way less ‘extreme’ than the first one you did [the infamous ‘STDs Will Fuck You Up’ design’]. Was that because of the reaction it received from retailers and the like?
I’m a freelancer, so I only hear about what they tell me. I think that they had shops pre-order it before the graphic was released, so when they got it some were like, “What the fuck is this? I can’t sell this!” So there was some backlash for sure, but it was right up the alley of the younger generation of kids that idolise the Helgasons. I think they were aiming for that, but mostly it was, “fuck it, we’re going to do exactly what we want to do – we have a crazy idea, and we’re doing to do it.” End of story.

Has there ever been plans for a graphic that pushed it even further than that?
Yeah, but oddly enough these days I’m the one saying “fuck it, it’s your brand, just do what you want,” but the Helgasons tend to be a little bit more careful. The STD board was well-received in a small circle, but it was too ‘out there.’ They have to sell boards, so at times they’ll want to tone it down a little bit. They tend to shy away from the sexual stuff these days; it’s more about randomness and silliness than shock value – not that that’s all they were about in the beginning…

Do you bring your regular style to this work, or is it a chance to do something different?
Yes and no. For my first full run with Lobster – which was their second season – there was a lot of work to do in a very short time, and I had to come up with a style to fit their ideas. The things they come up with are so specific – for example, a girl sitting on a toilet waving a flag… so I had to evolve my style to fit their ideas. These days I have a ‘Lobster style,’ and a style that I use for my other work.