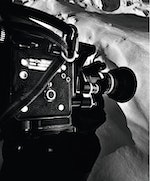 In the beginning was the Film. And the Film was good.

And the Film starred snowboarders much better than ourselves doing crazy things off cliffs, and charging down steep mountains, and sliding down rails before the cops arrive, and kicking footballs around foreign supermarkets.

And the Film had lots of powder.

Ah yes – if there’s one thing snowboarders enjoy almost as much as riding their boards, it’s watching other people ride their boards. As long as the sport has existed, in fact, there have been attempts to capture its sheer radness on celluloid. Over the years, these movies have become a central pillar of the scene, driving progression and creating heroes. They tell us what’s in and what’s not, who’s in and who’s not; they provide us with conversation for the pub, inspiration for the chairlift, music for our iPods and porn for the dry periods. They are the fuel for our fire. An additional ‘stoke’, if you will.

And how many other sports have such cool homework, I ask you? Cricket? They get Wisden.

Here then, is our A-Z of snowboarding on film. A tribute to the giants, clichés and essential ingredients of our favourite creative medium.

Is This Guy Riding A Real Surfboard On Snow?!

No, it hasn't been Photoshopped...

Riding A Surfboard On The Snow!

Is This Guy Riding A Real Surfboard On Snow?!

No, it hasn't been Photoshopped...

Riding A Surfboard On The Snow!

Woah, this is crazy!

Shop Monkey: Kevin Mills from Big Dreams
We use cookies on our website to give you the most relevant experience by remembering your preferences and repeat visits. By clicking “Accept All”, you consent to the use of ALL the cookies. However, you may visit "Cookie Settings" to provide a controlled consent.
Cookie SettingsAccept All
Manage consent