Born from two Northwave / Drake employees and distributed through the same C3 Worldwide foundation as Capita and Coal headwear – Union’s emergence in 2005 marked a new era for the design, development and detail going into the modern-day binding. With their focus going into bindings, they strive to make unbreakable products with the most responsive feel – a difficult balance to strike.

And with a rider list made up of the world’s heavyweight snowboarders, they must be doing something right. The brand was a quick success thanks to their engineering precision, durability, and progressive innovations. Introducing technologies like Forged Carbon, the Contact Pro baseplate and Microfused Injection has enabled them to produce lighter, stronger, smoother riding bindings than ever before.

Scroll down or select from the links below to check out our reviews of this season’s best Union Bindings snowboard gear.

The Union Ultra bindings have returned to the line after a few years’ absence, with a complete revamp for 2022/23. While the name may be the same, it looks like we have a different beast on our hands now. Not only is the personality very different, most of the tech on display hasn’t been seen anywhere in the Union line before now.

Who are The Union Ultra For?

Don’t be put off by the name; unlike elsewhere in the snowboardsphere, here ‘Ultra’ doesn’t mean ‘stiffer than Liz Truss attempting light-hearted banter’. This is actually aimed squarely at freestyle fans rather than hell-for-leather (or should that be carbon?) freeriders. There are versions for both men and women, featuring identical tech, so the potential customer base for this one is massive. 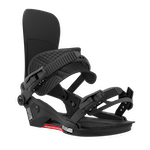 It’s not unusual these days to see a Pro/Plus/Mega moniker slapped onto a new product. Brands are jumping in with both feet and embracing the formula of taking a tried and tested fan favourite and giving it the ‘all the dials turned up to eleven’ treatment. That’s exactly what Union have done with the brand-new Atlas Pro, they’ve cherry picked the best materials in their toybox and manufactured a big brother to the Atlas that’s stiffer, lighter and more responsive. With its 9/10 flex rating and ultra reactive feel, the Atlas Pro is aimed squarely at high level riders, novices most certainly need not apply. The most responsive binding in the women’s Union line, the Trilogy is a true all-mountain offering that’ll take you from park laps to powder runs with aplomb. Using their Exoframe 4.0 ankle straps, Union have ensured you’ll get a locked-in feel, with the malleable material covering a large surface area and reducing pressure points over your boot. The highbacks are women’s specific shaping and hit go with the Goldilocks ‘not too soft, not too stiff’ formula for increased versatility. Union have legions of loyal followers across the world, and the simple reason is that they make really good, tough bindings that last season after season. 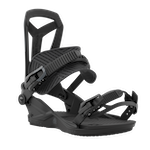 Travis Rice’s binding of choice, the Falcor combines high-end materials with clever manufacturing to create a super lightweight binding that’ll have your back in the gnarliest terrain on earth. A Forged Carbon spine sits through the middle of the highback, this cuts some serious grams but also delivers some seriously hefty power for technical riding. The baseplate, however, has a little bit more of a playful flex, to allow the freestyle portion to shine through. The straps are a stroke of genius, using three planes to allow for the perfect fit and to channel power effectively. You don’t have to be Travis Rice to ride these, but you do have to be confident and experienced. 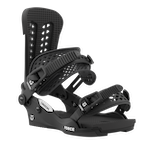 This season the Force turns 18! Happy birthday old friend, you’re officially an adult. Easily one of (if not THE) most iconic binding in snowboarding, the Union Force can be found strapped to the feet of thousands of riders all over the world. For the price, there’s not a lot that can hold a candle to the Force, definitive proof that you don’t have to throw down wads of cash to get a world class binder. Duraflex ST baseplate and highbacks to shave weight, Thermoformed EVA foam bushings to dampen chatter, bombproof heelcup and buckles to out last the season and fully adjustable sizing- the Force has it all.

Borealis
We use cookies on our website to give you the most relevant experience by remembering your preferences and repeat visits. By clicking “Accept All”, you consent to the use of ALL the cookies. However, you may visit "Cookie Settings" to provide a controlled consent.
Cookie SettingsAccept All
Manage consent