A newer brand that might not have the legacy that some of its competitors have, FW (or Future Wild) has still managed to take the outerwear industry by storm. Hailing from the mountains and nestled in the backdrop of Lake Annecy, FW combines decades of textile knowledge with a sleek, modern aesthetic to produce high-quality goods with rider refined features.

Despite their relative newcomer status FW has already managed to collect some big names in their pro team, including Euro rippers Alek Oestreng and Severin Van Der Meer. You can catch some of the team ripping in the Rhine Valley in Disentis here.

FW has taken steps to ensure they are being as socially conscious as possible in the manufacturing of their garments. As members of 1% for the Planet, FW donate a portion of revenue to climate based non-profits organisations. They’re also B Corp certified and manage their supply chain carefully to ensure it’s ethically sound. FW’s ethos when it comes to sustainability is akin to ‘Buy Well, Buy Once’, rather than using cheap materials they invest heavily in quality with the belief that a product should last. Their repair programme is one of the best we’ve seen to date, and aims to give new leases of life to garments that have begun to falter.

You’ll find a solid collection of outerwear, with specific collections for resort riding, backcountry and touring with FW. For winter 22/23, we named the Manifest Tour 3L as one of our top products of the year. It was, without question, well worthy of its place in the Whitelines 100. One more thing to note, the brand has also branched out into an array of soft goods including base layers, mid layers, and accessories.

Scroll down or select from the links below to check out our reviews of this season’s best FW snowboard outerwear.

Hailing from the mountains surrounding Lake Annecy, FW has established themselves as one of the go-to brands for backcountry enthusiasts. The relatively new brand has won us over with their minimalist yet functional line, and the 3-layer Manifest Tour jacket and bib pants are a fine example of why. Designed in both a men’s and women’s specific cut, this ‘made-four-touring’ outerwear setup is comfortable, durable, and easy on the eyes. 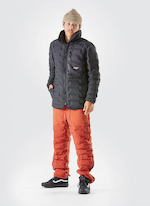 Sprung from the peaks around Lake Annecy, FW is a high-performance snow brand, known for their modern, minimalist aesthetic. Brand new for 2022, their Catalyst jacket looks more like something you’d wear skating than on the mountain. However, this insulated outer layer is built for shredding, complete with an innovative quilted design that’s more durable and water-resistant than your regular down equivalent. You can wear it as a standalone jacket, whilst the removable collar means it also works as an insulated midlayer. Pair with the matching joggers for ultimate comfort and warmth underneath your shell. Note: the jacket comes in a crew design too, available for both men and women.

By combining the durability of an outer shell, the warmth of light-weight insulation and the comfort of merino wool, FW’s created the perfect mid-layer. The brand’s devotion to delivering durable materials that are fit for purpose, whilst constantly incorporating new innovative materials and ideas, is how pieces like the FW Manifest Tour Hybrid Hoodie and Pants come to life.

Who Are The FW Manifest Tour Hybrid Hoodie and Pants For?

If you’re looking for a mid-layer that doesn’t only play its part on the slopes but also serves a purpose outside snowboarding, the FW Manifest Tour Hybrid Hoodie and Pants work equally well for cold-weather runs as they do for simply hanging out in. 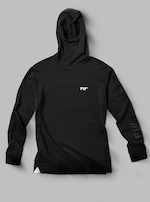 Whether you need a little extra insulation on sub-zero days, or just a base layer that looks good during après, French brand FW have you covered. Their simple yet high-performance Raw base layers are made with 90% merino wool. They’re designed to keep you toasty warm and dry thanks to the natural, sweat-wicking, capabilities. Choose from a long- or short-sleeved crew, plus there’s also a hoodie version with a built-in balaclava that fits under your helmet and also doubles up as a buff. Pair with the joggers (available in full and 3/4 length) for the comfiest base layer around.