Northwave’s history begins in the 1980s when Gianni Piva started making shoes in Montebelluna, Italy. The Piva family had been making performance footwear for years and when snowboarding became popular in their local mountains in the late 80s, Piva’s footwear expertise was sought out by snowboard brands looking to incorporate decent footwear to their line and he was quickly contracted to manufacture them. With a bunch of R&D under his belt, Piva decided he had the ingredients needed to build his own brand and so, in 1991, Northwave boots was born and the first line debuted.

Their boots are complemented by their sister company, Drake, who produce boards and bindings that interface seamlessly with the Northwave snowboard boots. Northwave boots come with super lace systems, T track tech closure systems and normal laces so there are options for everyone no matter what system of boot tightening system you prefer.

As you’d expect of a company based in the boot-making capital of the world, Northwave have the knack for making comfortable, performance-enhancing footwear loaded with proprietary tech. Be it the liners, sole units, shell or lacing system, everything’s been thought out to complement the boots’ fit and functionality. Whatever your price point or riding preference you’ll find a model for you, reflected by their diverse team of rippers – from Tyler Chorlton to Veroniqi Hansen via the swift swiping of Alex Stewart and Ethan Morgan, who recently launched his signature boot, the Gaper 69.

Scroll down or select from the links below to check out our reviews of this season’s best Northwave snowboard gear. As one of Germany’s top riders, you can expect both style and durability from Ethan Morgan’s second pro model boot. It features all the pros of the Decade, a boot that’s undergone 30 years of development to ensure it’s at the top of its game. Think snug liner with extra heel retention, tough outer reinforcements and low-profile grippy outsole. However, the difference with the Pro Ethan is the introduction of laces, ready to be cranked to your desired tightness. Artistic types can let their creativity run wild with these boots; they come with a pack of graffiti pens, so you can customise this blank canvas anyway you want. 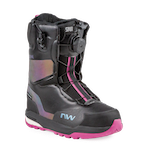 The stiffest boot in Northwave’s women’s line, the Devine Hybrid is designed for experienced riders who value comfort as much as they do performance. With its 7/10 flex, the Domino Hybrid has enough gas in the tank for charging on piste but won’t inhibit you when you want to take a playful lap through the park. As the Hybrid model, as you’ve probably guessed this iteration of the Devine uses a combo lacing system. You’ve got Northwave’s Speed Lace on the side and a dial so you can really find the fit that works for you. The liner is thermo moldable for increased comfort, with the rubberised sole for added traction. 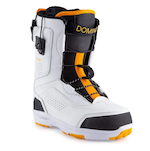 One of Northwave’s most enduring models, the Domino isn’t as fragile as it might sound. In fact, it’s their sturdiest boot, built to withstand ground-shaking landings off giant kickers and long days charging the backcountry. There are two models to choose from this year. First up, the 2Spin utilises their spin technology for greater heel lock than ever before, while the second dial closes the front of the boot snug around your foot. Meanwhile, the SLS model features their Super Lace Single system for smooth entry and exit. Both feature toasty liners with grippy outsoles to stop any slippery mishaps during après.