Facebook. Y’know, the little-known social network that currently has 1.1 billion people signed up to it (yep, that’s pretty much a seventh of the world’s population…).

We’re on it, your gran is on it, heck, your dog is probably on it. With so much potential for reach it’s obviously a pretty valuable marketing tool for the big snowboard brands and personalities of the world. But which snowboarders are smashing it on the world’s biggest social network? And are they the snowboarders you’d expect?

Check out our snazzy infographic below to see who the 10 most ‘liked’ snowboarders on Faffbook are. We’ve represented each rider as a proportional figure so Travis Rice, who has approximately two times as many ‘likers’ as Torstein Horgmo has a silhouette that’s twice as big – simple! 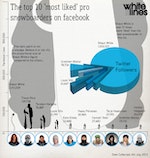 If you were wondering where Shaun White’s figure was, well that big grey patch in the background…? Yeah, those are his feet…

But what has got each rider into the top ten? And why does Shaun White dominate in such a big way? Here are the top ten in reverse chronological order…

Perhaps surprising to some, Icelandic superstar jester Halldor Helgason only just squeezes onto the bottom of this list. On top of being a ridiculously talented snowboarder with X Games gold medals to his name, Halldor (alongside his older brother Eiki who has far fewer ‘likers’ at 7197) has also started no less than three snowboard brands. We’re only considering individual riders for this list but if we’d used the Helgasons.com’s joint Facebook page instead they’d have jumped up three whole places (with 27,988 likes).

With her wavy blond hair, barbie-doll looks, and multiple medals at the Olympics and X Games, it’s no surprise that Gretchen Bleiler has become a pretty big deal over in the US of A. How could you not give ‘er a ‘like’ with a smile that perfect?

He may be the godfather of modern snowboarding but at ‘only’ 27,000 likes, he certainly ain’t the godfather of Facebook. That said, Terje is the oldest and wisest snowboarder in the top 10. His page is worth a like if you’re after opinions, grams (check this one of him testing the new Burton AK stuff – on a surfboard…) and musings from one of the most respected snowboarders ever. If Facebook is good enough for Terje, it’s good enough for you, fact.

Not only did Hannah Teter pip Gretchen Bleiler to a gold medal at the 2006 Turin Olympics, but she also one-upped her teammate in the Facebook rankings – albeit by a fairly narrow margin (it’s all good though, they’re bff…). Hannah’s also built up a pretty loyal following in the States, owed in part to having a Ben and Jerry’s flavour made in her honour, talking through the similarities between snowboarders and astronauts on the NASA website and of course, getting her kit off for the boys.

Peetu Piiroinen is one dude who we’re pleasantly surprised to see in this top 10. It’s not like he’s an unsuccessful rider, (and having won the overall TTR world title a whopping four times, there’s actually an argument that he’s one of the most successful ever), but in our eyes, Peetu lacks that marketable personality. Y’know, the thing that that smug little man on ITV would call ‘the X Factor’. He’s quiet, unassuming and let’s face it, a little boring infront of the camera. Generic Finnish accent aside, can you even recall what his voice sounds like? Nah, us neither. Don’t get us wrong though, we love the fella.

Eero Ettala comes in at number 6 with almost 34,000 Facebook likes. With his X Games slopestyle victory back in 2010, and more recently his highly successful Real Snow parts, Eero has been constantly pushing boundaries in the park and streets. With a popular website and Cooking with Gas web series, the man is also pretty clued on when it comes to social media. And can pretty much do a backside rodeo off anything…

The top 5 is where the figures start to ramp up quite sharply. Louie Vito comes in at number 5 with almost 51,000 Facebook likes. The spinny, flippy pipe rider has been killing it in the pipe recently, winning a gold medal at this year’s European X Games, but if we’re being realistic, a massive chunk of his Facebook fans probably come from his stint on the American show Dancing with the Stars. Yep, Louie was paired up with an attractive blonde dancer called Chelsie, turned orange and pranced around on American TV for a fat wad of moolah. It certainly wasn’t the most punk rock of moves (more jive, samba and tango actually) but it’s clearly done wonders for his online clout, and snowboard career at that.

Devun Walsh confused us when we were compiling this list. His athlete page only has 1360 likes but his personal page is followed by a whopping 65,000 people… If all of those followers ‘liked’ his athlete page he’d slot right in between Louie Vito and Torstein Horgmo. Which would have been rad. Still, Devun remains well respected in snowboarding, is one of this author’s favourite riders and still puts out sick full parts, despite not really getting the same sort of coverage as when he was killing it in ‘The Resistance’ as part of the legendary Forum 8. He’s the definition of a true snowboarder’s snowboarder. Give him a like on Facebook (on his athlete and personal page!) to stay up to date with his love of golf, dog, wife, snowmobile, oh and of course, powder.

Torstein Horgmo. He’s kind of a big deal you know. So much in fact that he was the star of his very own movie. Torstein is one of the few European riders who really resonates with a younger audience over in the United States and with his hilarious (and rather prolific) shredits, has managed to create a serious amount of mainstream appeal. There’s simply no denying that the kid absolutely rips on a snowboard and has the rockstar personality to back up that talent. If Torstein were a footballer he’d be a Christiano Ronaldo of sorts – supremely skilful, cocky and all-in-all a force to be reckoned with.

No surprises that Travis Rice is one of the  biggest snowboard personalities on Facebook. The Art if Flight garnered a huge amount of mainstream appeal when it dropped a couple of years ago and as the face of it all, Travis Rice has grown into a true global phenomenon. ESPN recently called him the 5th most influential person in extreme sports, RedBull reckon he’s the world’s best snowboarder (no surprises there if you look at his sponsor list) and as arguably one of the best freestyle snowboarders in the world – and owner of a pretty giant personality – it’s understandable that he has a very healthy following on Facebook as well.

But even Travis Rice can’t come close to Mr. Shaun White. He’s the figurehead of modern competitive snowboarding, one of the worlds only true one-man brands, and on top of his private jets, rock bands and bulging medal collection, a pretty freaking big deal. Shaun clenched a six-peat at this year’s X Games, has two olympic gold medals and remains the only athlete ever to win a gold medal at both the summer and winter X Games.

Some would say he’s the equivalent of Justin Bieber in snowboarding, just with slightly less weird hair (although that could also be up for debate…).

But how does Shaun size up to the other massive figures in boardsports – namely Kelly Slater and Tony Hawk? Even though he hasn’t competed professionally since 1999, Tony Hawk is the most ‘liked’ boardsport giant by a margin of over 2 million Facebook likes – a figure around 5 times greater than the combined number of Facebook likes of the 9 snowboarders on the previous page…

Tony is widely recognised as one of the most successful and influential pioneers of modern vert skating, landing the first 900 and skating professionally for 18 years while spawning a wildly successful computer game series, making numerous TV and film appearances and setting up the Tony Hawk Foundation charity. It’s no surprise he’s a popular man on social media but we would never have guessed he’d trump the flying tomato so comprehensively.

Another surprise comes in the form of Kelly Slater, who still dominates competitive surfing at the age of 40 with a staggering 11 world titles and 50 ASP wins under his belt. Slater is arguably one of, if not the greatest action sports athlete of all time yet ‘only’ has 658,000 likes on Facebook – almost 4 times less than Mr. White.

Is surfing less popular than snowboarding and skating? Does Kelly Slater have less mainstream appeal than Hawk and White? Or are surfers just not as bothered about following their big dogs on social media?

Moreover, does the number of likers and followers on social media have any real importance in determining an athlete’s influence and overall clout?

Truth be told, the exact reasons and speculations as to the differences are beyond the scope of this article. What we can take from the stats are that even the individuals who we (as snowboarders) perceive to be huge in the grand scheme of things are merely cogs in a much larger social media machine.

Nike's team head for a shred behind the Iron Curtain

The Don has still got it!

Would you use this thing snowboarding?

Nike's team head for a shred behind the Iron Curtain

The Don has still got it!

Would you use this thing snowboarding?

Is it an abstract artwork? Nope, it's a banging snowboard shot for your desktop!