Like European neighbours Nidecker, it took the best part of 60 years for Salomon to start developing a snowboard line, but as our Irish neighbours say: ‘Good things come to those who wait’.

With Daniel Frank and Michelle Tagart as their original R&D riders, Salomon got off to a flying start with their tech sandwiched snowboards and simple graphics. Thanks to a big European presence, riders like David Benedek were snapped up by the new brand with a little… je ne sais quoi.

These days Salomon have a tight team stretching across the 7 continents (well 5) and have a smörgåsbord of different riders. Rail technicians like Louif Paradis, Flo Corzelius, Harrison Gordon, Bode Merrill, Will Smith and Desiree Melancon all lead the charge with a Salomon strapped to their feet; while riders like Tess Coady, Maddie Mastro, Dusty Henricksen and Sven Thorgren help to spearhead of the competition side of things.

A long-time supporter of Robot Food films, Salomon were jointly responsible for epic releases alongside Mr Benedek – and projects like Afterbang, Lame, In Short and the iconic 91 Words For Snow wouldn’t have been possible without their support.

They have been owned by the Amer Sports group since they were bought off adidas in 2005.

Scroll down or select from the links below to check out our reviews of this season’s best Salomon snowboard gear.

Drawing inspiration from the new Salomon Highpath, the redesigned Sight is a genuinely good choice for those who are balling on more of a budget, or looking to take their first dip into the endless pool of freeride snowboarding.

The flex and profile tend towards a mellow option for either more inexperienced riders, or those who prefer to make surfy turns rather than threading the needle down super gnarly turf. It’s an adaptable snowboard that takes some really clever Salomon tech and tones it down into an affordable and attainable package. And all for less than 400 bucks, what a bargain.

Who Is The Salomon Sight For?

You’d err towards the freeride side of all-mountain riding and are looking for a budget friendly option to open the doors for you. Despite taking inspiration from some heavy hitters, the Sight’s easy going flex and mellow ingredient list earmark it as one that can be used by everybody; from novices all the way to pros. 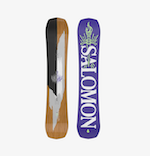 No doubt, you’ll have owned an Assassin at some point – or at least one of your mates will have. It’s a long-time favourite with seasonaires and industry folk alike. With its directional twin shape, medium flex, and rock-out camber, this all-mountain board cruises over any terrain – from icy groomers to deep pow. The wider nose gives that extra float off-piste, while the rock-out camber provides better stability underfoot. If that wasn’t enough, the high-tech sidecut promises maximum grip and control when carving. A quiver killer? Quite possibly, especially when you see this board’s potential while hooning through the park or just gunning it back to resort for après.

Turn up the tempo with this fluoro-yellow unisex board from Salomon. You can already tell from the shape that the Dancehaul equals fun, an all-mountain deck with bags of personality. Yes, loads of boards nowadays fall under the all-mountain remit, but this one really does tick all the boxes. Not only does it ride like a high-speed carver, but it’s also got the pop of a freestyle board underfoot. When it comes to bombing through powder, the tapered tail and fat nose provide extra float. If you’re looking to spice up the same ol’ runs, then it’s worth taking the Dancehaul for a spin.

A true park board, the Huck Knife does what it says on the tin. It’s made for hucking off big kickers and slicing through air, and snow, as you put down a steezy three. Prepare yourself for a slightly easier ride with the Huck Knife compared to the Pro. The medium flex, carbon stringers aggressive camber profile mean this board is loaded with explosive pop, as well as plenty of stability for jibbing around the park. If you’re an intermediate to advanced freestyle rider, looking to expand your trick book, then take a closer look at the Huck Knife.

Getting the right pair of boots is never more important than it is at the start of your snowboarding journey. First and foremost you need something that will keep you warm and dry, but that will also follow your commands as you progress. It can feal like quite a lot of outlay so early on, and getting it wrong could hinder your chances of reaching the next level. Take it from us, though; the Salomon Scarlet will slash your chances of experiencing buyer’s remorse.

There is a choice of lacing systems available; a convenient speed-lace (and Salomon’s is one of the best in the game), and an even-more-convenient Boa wire with a single dial on the tongue. The latter is slightly pricier, mind.

Who Is The Salomon Scarlet For?

This model is a terrific option for the rider that wants a softer flex and minimal faff. Yes, it’s far short of Salomon’s peak-chasing premium boots, but variety is the spice of life. Matched to the right feet, these are bona fide mood-enhancers.

Our pick of this season's best KORUA Shapes snowboard gear

KORUA Shapes
We use cookies on our website to give you the most relevant experience by remembering your preferences and repeat visits. By clicking “Accept All”, you consent to the use of ALL the cookies. However, you may visit "Cookie Settings" to provide a controlled consent.
Cookie SettingsAccept All
Manage consent