This year Vans commemorates 20 years of being (as they put it) “Off the Wall” and on the snow.

Starting out as a skate shoe maker in California in 1966, Vans started making snowboard boots in 1993. Twenty years later and they’re still going. They’ll be celebrating this achievement with the launch of their brand new ‘Mountain Edition’ range, consisting of a boot, a jacket and a sock. Check it out, it looks pretty dope. 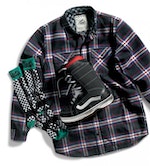 Over the course of their two decades in the business, Vans have supported some of the biggest names in snowboarding and some top events. Think the legend that is Jamie Lynn and the naked blue woman on his signature boot, or going back further, ultimate hell-raiser Shaun Palmer who was also on the Vans team. Today their team includes the likes of Pat Moore, Mark Landvik, Hana Beaman, Wolle Nyvelt, Markus Keller, Iouri “iPod” Podlatchikov, Cheryl Maas and Arthur Longo Not bad eh?

They were also the driving force behind events like Mayrhofen’s Aesthetiker-run Wangl Tangl event, which for years was one of Europe’s sickest and most unique comps, as well as Scotland’s classic Dawn of the Shred contests, and the more recent Hi Standard Series.

On the product side, Vans have also done a lot in their two decades. They were the first company to start using the Boa system on their boots, and in 1997, they became the first brand to produce a signature boot, rewriting the rules for brand-rider relationships and opening the door for a whole host of cool collaborations.

Vans will no doubt be opening a few bottles of champagne in NY with the event which will feature artwork by some of their riders, a specially-produced film, “Twenty Years: Off the Wall, On the Snow”, made by Standard Films’ Mike Hatchett, and apparently, musical performances from Jamie Lynn and Zac Marben’s bands. Sounds like quite the party!

Check out the photos from Mission's London Premiere...

Changes are being made to teh schedules at the Snow Centre

Check out all the best shots from this Wednesday's Naturally party

Check out the photos from Mission's London Premiere...

Changes are being made to teh schedules at the Snow Centre

Check out all the best shots from this Wednesday's Naturally party