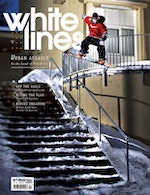 The second issue of the season for November 2012 is only a couple days aways from hitting the shelves and slipping through letterboxes. Here’s what you can expect inside issue 104 – once you’ve stopped gawking over that banging Halldor Helgason cover that is:

JED ANDERSON INTERVIEW: DO YOU BELIEVE THE HYPE?
We caught up with the tight trousered, tight stanced Canadian jib prodigy to bring you Jed’s thoughts on everything from filming with Nike and his previous experiences as a pipe rider to the ever-topical stance debate.

GOING FURTHER IN AUSTRIA WITH JEREMY JONES AND DAN MILNER
UK photographer Dan Milner reveals the highs, lows, the hardships and the perils that are all part and parcel of documenting Jeremy Jones on his Further project.

ICELANDIC RAIL ASSAULT WITH THE NIKE TEAM
Nike team manager Jon Weaver and a miniature army of some of Nike’s most promising rail talents (including the UK’s very own Jamie Nicholls), head to a far away land bursting at the seams with street-spot potential: Iceland.

BEARSDEN: FLYING THE FLAG FOR SCOTLAND
One scottish slope has been monumental in keeping the dryslope flame alive. We look at all of the benefits that Bearsden, along with the rest of the UK’s mats still bring to our budding freestylers.

Best of all, you can get all of this for just £4.95! So what are you waiting for, head down to WH Smiths, grab yourself a copy, and get pumped for winter!

Has the ever-evolving goggle trend finally managed to go up its own arse?

Ever wondered what a frontside 270 gap to down on a 12m down flat down looks like...?

All the best Halldor bits from the Helgasons' masterpiece Pepping!

Has the ever-evolving goggle trend finally managed to go up its own arse?

Ever wondered what a frontside 270 gap to down on a 12m down flat down looks like...?

All the best Halldor bits from the Helgasons' masterpiece Pepping!

Watch all of the hits that earned Jamie second place!

All the tricks and results from the second leg of our rail jam tour.

November Knockout Castleford - John Weatherley and Orla Doolin take the top spots
We use cookies on our website to give you the most relevant experience by remembering your preferences and repeat visits. By clicking “Accept All”, you consent to the use of ALL the cookies. However, you may visit "Cookie Settings" to provide a controlled consent.
Cookie SettingsAccept All
Manage consent