Has the goggle trend gone too far? Win yourself a pair of Oakley Airbrakes for your comments.

Snowboarding’s always had precarious relationship with fashion, and none more so than the whole eyewear conundrum.

Do you go the classic goggle look…?

… Should the strap go around the helmet?

(That is, if you’re on the helmet side of the argument)

… Or are we going full Darth Vader?

… Goggles low enough down the face? 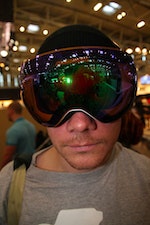 … Have you avoided the dreaded twat gap?

… How about a Terminator-style head-up display?

… or should you keep it old school with some retro shades. Y’know, now that sunnies are ‘allowed’ again?

But now it seems there is a new faux pas waiting to catch the fashion kook unawares. Goggles. Yep, that’s right, wearing any kind of goggles at all – at least, if you’re shredding in the street.

At first glance, this does kind of make sense. You’re not up a mountain, so why are you rocking a great big pair of polarised lenses? Back in the day you’d regularly see the likes of JP Walker hitting urban handrails with his goggles pulled up on his forehead. On night shoots especially it sometimes smacked of a snowboarder wearing them out of habit, or even keeping his sponsors happy (y’know, great big ‘O’ on the side and all that – and the Daily Mail can tell you all about how uncool that is, guys).

But like all things steeze, it has been taken to its logical extreme, such that it is now deemed straight-up ‘gay’ by the cool kids if a pro like Eero Ettala forgets to ditch the eyewear when shooting massive urban gaps in Helsinki. Like narrow/wide stances and baggy/tight pants, you gotta go the whole hog to keep things properly ‘legit’.

Then, the other day, this video popped up:

Now, jibbing Jeremy Jones has made a career of keeping up with the kids, and suffice to say these days he won’t be seen dead in a free pair of free Anons whilst trawling for spots in his native Salt Lake City. But when Jeremy’s struggling to see shit through the swirling pre-season snow – while his filmer is hunkered down in a hood and a cosy set of iridiums – then you know the style nazis have won. “I couldn’t see nothin’ cos of the snow” he tells his buddy after one slam. “I just went blind and hurt so bad.”

Forget the cops – are jibbers getting shut down by the fashion police?

Playing fair
We use cookies on our website to give you the most relevant experience by remembering your preferences and repeat visits. By clicking “Accept All”, you consent to the use of ALL the cookies. However, you may visit "Cookie Settings" to provide a controlled consent.
Cookie SettingsAccept All
Manage consent