If superhero team-ups and fusion cooking have taught us nothing else, it’s that disparate elements working together can yield terrific results. Of course, it could still all end horribly – just look at the kebab pizza, or any of the Fantastic Four movies.

“Which managed to hit Anthrax/Public Enemy highs, and which plumbed the Cameron/Clegg depths?”

In its relatively short life, snowboarding has seen more than its fair share of collabs. There have been those between brands within the sport (such as Volcom’s work with CAPiTA and Electric, or the Union x Vans binding), but infinitely more interesting are the ones where companies from outside the shred world piggy-back their way in via partnerships with core brands. Sometimes it’s done very well, while others border on the atrocious.

So which projects managed to hit Anthrax/Public Enemy highs, and which plumbed the Cameron/Clegg depths? And is there anyone left out there that Burton hasn’t collaborated with? Read on to find out… 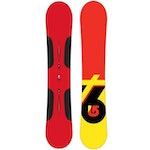 We begin with the collab masters – on any given year, it seems that the B’s team-ups with artists and companies outnumber some other brands’ whole ranges.

In 2009 they released a limited edition version of their high-end T6 board, decked out by the makers of some of the most iconic cars Ferrari ever made. As a result, a famously flash board got even flasher.

The long-standing partnership between the B and the bunny has landed them in some hot water in the past, but it clearly hasn’t deterred them. After all, there’s never a shortage of buyers. 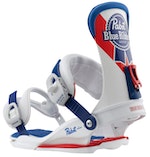 The canned beer loved by American college kids got splashed on a pair of Union Contacts in this late-release collab from the 2011/12 season.

Incorporating the brand’s iconic red, white and blue design was a no-brainer, meaning these look a lot better than PBR tastes.

This year their collab is with Rainier Beer, a less ubiquious brand from Washington State, named after the famous mountain.

This one’s based on the Union Force binding.

By roping in the fellow the French call Bob L’Éponge, Salomon gave themselves the best possible chance of selling their wares to those who, until recently, had been fetuses. Brett Gurewitz’s punk outfit got the Grenade treatment in 2012/13. As well as these nifty pipe gloves, they also released a jacket in the same style.

Extra points for using a hybrid of the two logos – although after all the bother they’ve had in the past from sensitive types, they probably didn’t want to slap BR’s own design on there…

We’re not even sure if Gwen Stefani snowboards, but she’s well into her fashion. When Burton called, she clearly didn’t hold back.

Her L.A.M.B. range contains the most eye-catching stuff in the brand’s 2015/16 range, and is unlikely to shift in the numbers that No Doubt albums did, but it’s certainly something different.

Another musical collaboration, and perfect for anyone doing, ahem, a ‘season’. Available only in limited numbers, this Burton Lipstick women’s snowboard was designed with input from hip-hop duo Salt N Pepa.

The ladies themselves adorn the topsheet, while the base meant that anyone chucking a method on this was paying homage to one of their most famous songs. Push it real good!

Back in 2013, outerwear brand 686 teamed up with Alaskan crab fisherman Elliot Neese.

When not on the job, Neese would snowboard in Washington State, and in doing so got friendly with the 686 guys. Before long they’d kitted him and the crew of his boat out with specially made gear, which they wore while out landing crabs. The clobber even featured on popular TV show Deadliest Catch.

Check out the original press release – and some horrendous puns – here

This one’s bang up to date – as part of their 2015/16 range, Electric goggles have released frames and straps referencing the children’s army toys GI Joe, as well as arch-baddies Cobra.

Choose whether you stand with Duke or Destro, then stoke out the kid in you with a pair of these.

British fashion designer Paul Smith loves him some stripes, and there’s plenty of them on this 2011 Burton Vapour.

He’s actually worked with Burton several times. Unsurprisingly most of it involves clothing, and his other contributions to the B’s line include jackets, hats and woolly jumpers.

Here’s a similar one, this time via the fashion-focused offshoot of the Pirelli tyre company.

They released a full setup of board, boots and bindings in 2012/13. Unsurprisingly, the boots featured tyre rubber in the sole. 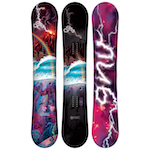 Barrett Christy‘s had a pro model snowboard with Gnu for over 20 years now, and she’s still ripping up the North West at every opportunity.

Proceeds from the sales of her B-Pro go towards Boarding For Breast Cancer, a charity set up by Barrett’s friend and fellow rider Tina Basich. The eagle-eyed amongst you will spot the B4BC logo on the topsheet of the 2015/16 B-Pro.

As we’ve already seen, Union has booze collabs pretty much swen up – and they’ve also dabbled in scran.

Portland eatery Cobra Dogs is massively popular with the riders that hit Oregon for summer shreds, and the classic fast-food colours are present and correct on these bindings.

Burton aren’t the only company to experiment with wearable tech in this way, but their Audex jacket – a collab with Motorola – gets the spot on this list purely for this cringeworthy promotional video featuring Marko Grilc, Luke Mitrani, Hannah Teter and Jussi Oksanen. Oooft…

Boston-based footwear company New Balance had a brief dalliance with 686, but the relationship with their fellow New Englanders at Burton has proven to be far more substantial.

It’s a deal that continues to this day, with each snowboard boot in the range having a corresponding New Balance shoe.

A visit to the shop owned by legendary surfboard shaper Bill Stewart unearthed a gem – he’s had a crack at making a snowboard back in the 80s, and still had it at his house.

With his blessing, the Bataleon designers took his design and ported it onto their most surfy model of 2014/15, the Camel Toe.

The Frye Company are big in the leather boot world, and this women’s boot certainly looks tough – although we’re not sure about the superflous metal hoops placed right where your ankle strap goes.

This year’s version looks a bit more practical, at least.

Legendary surf shaper Matt Belios is the man behind these two new snowboards from Lib.

The Mayhem Rocket (left) has a wide waist that makes it ideal for floating in pow, while the Mayhem Round Nose Fish (right) is built for carving up the groomers.

Yet another surf-shaper collab, the Powder Surfer’s shape and profile was designed by renowned Californian shaper Chris Christensen.

With hooks instead of bindings, you get more of control in the pow than a standard noboard, but more freedom to make those surfy turns.

Danny Davis likes a strum, so it made sense to deck his 14/15 Easy Livin pro model out with guitar graphics.

It’s actually an official partnership with C.F. Martin Acoustic Guitars, so we imagine Danny got a decent six-stringer out of the deal too.

This new offering for 2015/16 is Run DMC’s best collaboration since Walk This Way.

Using a classic photo of the hip-hop legends in Paris as the topsheet, and an adidas-inspired base graphic, Endeavor have doffed the cap in fine style.

Snurfer are not only still in business, but they’ve recently teamed up with Rome to make a board that’s pretty nifty-looking – even if doesn’t have a great deal in common with Sherman Poppen’s original fun stick.

The WST was having a rough time of it in 2013/14, when all eyes were on the FIS-run Winter Olympics.

Perhaps this Nitro collab – designed by Pat Milbery and David Sheets – cheered them up.

We wouldn’t have imagined the Venn diagram of Burton fans and Tron fans would have much overlap, but here’s one for those guys anyway.

What’s next, a ‘lightboard’ that leaves a coloured trail on the snow?

Which of these do you rate? And did we miss any? Let us know what makes your best/worst snowboard collabs in the comments below.

Snowboarding In 2016 - Our Predictions

We run a goggle wipe over the Whitelines crystal ball

Snowboarding In 2016 - Our Predictions

From board to bench... and beyond!

From stylish straight airs to double corks, watch how the best snowboarders in the world kick off their halfpipe routines

Snowboard Halfpipe - 10 Best First Hits Of All Time
We use cookies on our website to give you the most relevant experience by remembering your preferences and repeat visits. By clicking “Accept All”, you consent to the use of ALL the cookies. However, you may visit "Cookie Settings" to provide a controlled consent.
Cookie SettingsAccept All
Manage consent