Why we chose the Capita Super DOA Snowboard: It’s the super version of the DOA – what else is there to say really?

Add super to anything and you’ll know it will be rad – add super to Capita’s DOA and you’ll get a turbo charged ripstick raring for action.

“With a flex rating only one number higher than the DOA, the Super DOA might please the ones longing for a bit more aggression to their riding”

The Capita Super DOA is a new, slightly stiffer version of the Capita DOA and with somewhat different tech. A more aggressive ride than its namesake, it’s built for stomping, slashing and sliding.

The hybrid profile is designed to rip all over the hill, regardless of the conditions. With camber between the feet, a short flat section outside the feet and an even shorter rocker section in the nose and tail, you’ll get pop, stability and float. The stiffer flex will lend itself to larger freestyle riding and boosting off of features.

With Capita’s new 3D Hover Core, specifically designed for this board, the Super DOA is blessed with an extremely lightweight and energetic core, giving you pop whenever and wherever. The Kevlar sidewalls are bulletproof, literally, and you’ll have to go to great lengths in order to break these. Throw this board in the ring with Mike Tyson and we can assure you it’s not the Super DOA that’ll end up toothless.

Capita’s strategic placement of tri-ax fibreglass gives you an increased torsional response, without loading up weight. Add the magic bean resin to this, and you’ll get yourself an eco-friendly option, that adds both pop and power to the board.

Staying true to the Motherships exclusive Hyperdrive Base, the Capita Super DOA is like something straight out of Tokyo Drift. If you love to charge this base will make you fly faster than superman on chemical substances. So, buckle up, and let the Capita Super DOA do its job. This board will make you think gravity is just another conspiracy theory.

“Anyone who has ridden the DOA (and the remaining few who haven’t), listen up: The Super DOA is maybe the best board to come out of this season. I rode DOAs for several seasons and loved their all-mountain freestyle versatility. The one downside was that I did break a couple of them along the way and felt they lacked that little bit of extra ‘oomph’.

Problem well and truly solved. The Super DOA has a lighter – but stronger – core, a stiffer flex pattern and a faster base. While it’s kept much of the same shape and profile from the original, it looks completely different. The core has been 3D milled to look like it’s developed a six-pack and staring down at this thing at the top of the run definitely made me question if I should have taken the OG out for a lap instead.

As soon as I was on the move things just fell into place. The core isn’t that much stiffer, and with the rockered nose and tail and flat-kicks, it’s just as easy to press and butter as before. Where I noticed the shift up was in its pop, precision on edge and speed.

The camber isn’t massive, but the new core makes it way easier to load up and release energy into your ollies with a far more rewarding payoff. I also felt it down the sidewall, the Super DOA can be worked through a turn far more aggressively than its predecessor.

In terms of speed, I rode it on the last couple laps of the day, and it had clearly been tested out pretty hard before me, so the base was starting to run dry. Even so, it continued to glide and didn’t feel a million miles away from some of the lesser specced, freshly waxed, boards I’d ridden that morning.

It’s a bit of a splurge for early intermediate riders as the DOA will sufficiently cater to your needs, but for anyone looking to push their freestyle riding (or looking for a board to it for them instead), form an orderly queue.” 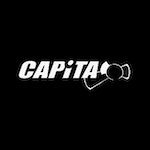 “The Super DOA is hands down the lightest and fastest board in the universe. It’s got the performance and reliability of the traditional DOA but when you ride it you quickly realize why they added the “super” to the name. It’s light as a feather but built like a tank to ride through any terrain. It has tons of pop and it’s a go to board in my quiver when I want to go charge down a mountain.”