Yet another company hailing from the shores of Western America, The North Face has always been synonymous with high-end ‘adventure’ wear. In recent years though, TNF (as they call it in the biz) have been making some significant moves into the snowboard market.

Skiers have been in their get-up since the mid ’80s but thanks, in part, to the acquisition of French slayer Xavier de le Rue, people have started taking their commitment to snowboarding a little bit more seriously.

TNF is owned by the VF Corporation, who also have majority ownership in Vans, Smartwool and Eastpak. It’s not all big business without attention to the details however, and they’ve started to really plant some roots. In more recent years, The North Face has been making a push into the less high-alpine areas of snowboarding; as the signings of Jess Kimura and David Djité attest to.

Featuring lightweight tech and heavy-duty waterproofing, the collections from TNF have been designed to have your back in almost any conditions. And the designs won’t have you looking like a grizzled alpinist either – there’s plenty of flare amongst the more sober designs. Shoutout to their patented FUTURELIGHT technology.

Scroll down or select from the links below to check out our reviews of this season’s best The North Face snowboard gear and outerwear. 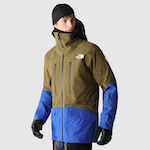 With a name like Summit Verbier, you know this high-performance jacket and pants are designed for big mountain chargers. Waterproofing and breathability are crucially important in the backcountry. Rather than use Gore-Tex, The North Face pioneered their own Futurelight fabric that not only keeps you warm and bone-dry, but provides generous stretch and mobility while riding. The jacket cuts a longer freeride style, complete with welcome additions like a helmet-compatible hood and generous oversized pockets. Meanwhile, on the bib pants, the springy braces promise a comfy fit, even when you’re pushing your riding to the limit. An outerwear combo that won’t let you down in harsh conditions. 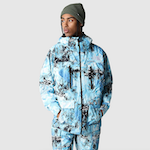 Designed in collaboration with street rider Cole Navin, this North Face outerwear combo offers a more baggy, casual look than their signature freeride apparel. The bold patterned fabric was the brainchild of Navin himself, inspired by his experiences riding rails in urban Massachusetts. Beneath the aesthetics, however, you’ll be impressed by the high-tech waterproof and breathable DryVent outer layer, designed to keep out spray and slush. Extra features include a YKK Aquaguard pocket to keep your phone dry, underarm vents for sweaty spring laps, plus a fixed powder skirt. You wouldn’t look out of place in the park nor the backcountry repping this statement set.

We’ll set the scene; it’s a frigid winter day, you’ve been out riding all day with your buddies, after a killer afternoon you make your way back to where you’re staying. First things first, sit down and get those janky boots off your feet. Seriously, they stink, maybe consider getting some new ones. Peel those sweaty socks off, and finally, sweet release, your feet are free. Now what?

Are you just going to wander around barefoot? Hell no, you’re not. Let us tell you exactly what you’re gonna do. You grab your ultra cushy pair of The North Face Thermoball V Traction Winter Mule’s and stick those bad boys on your feet. Instant relief. Instant warmth. Instant vibes.

Whos Is The North Face Thermoball V Traction Winter Mule For?
You don’t have to be a snowboarder to enjoy these, but we’ve never once been on a trip to the mountains without someone whipping out a pair of these and making the rest of the crew jealous. Wear them at home, wear them on a ski trip, hell, even wear them on a first date if you like ‘em.

No Risk, No Reward | Marion Haerty

Marion Haerty is not afraid of a challenge and in her latest film project for The North Face, ‘Line and Air’, she explores some of...

No Risk, No Reward | Marion Haerty

FW
We use cookies on our website to give you the most relevant experience by remembering your preferences and repeat visits. By clicking “Accept All”, you consent to the use of ALL the cookies. However, you may visit "Cookie Settings" to provide a controlled consent.
Cookie SettingsAccept All
Manage consent