K2 have been making skis since 1961 and started making snowboards back in 1988. Back in the 60s, Bill Kirschner was doing some experimenting and made the first fibreglass skis. K2 was born and as snowboarding was in its infancy, K2 got involved and started making premium products for flouro-one-piece riders with mullets who were part of the original 1980s snowboard scene.

The K2 Gyrator that came out in 1988 is a piece of snowboarding history, and up there with the snurfer in terms of being a classic ‘must-have-piece’ of collector’s gear. With the bright neon colours, it looks beamed in straight from the 80s. The brand have rereleased the Gyrator in recent years, albeit with new technology and everything you’d expect from a modern snowboard.

K2 has never been afraid of innovation and is partly to blame for the recent rocker revival that is proving very popular on the slopes. Some of their early experiments have also made a comeback in recent years, like the step-in bindings (now K2 Clicker X Step-In Binding). In more recent years, K2 has also tapped into the splitboard market and added splitboards to their line.

K2 continue to push their products to the next level with the help of their international pro team. Riders like David Djite, Pat Moore, Leanne Pelosi, Kennedi Deck , Sage Kotsenburg, Steve Gruber, and many more, put K2 boards, boots and bindings through their paces.

Scroll down or select from the links below to check out our reviews of this season’s best K2 snowboard gear.

For 2023, K2 have expanded their unisex offering with the all-new Passport. This is your ticket to ride just about anything, with a lively personality and rider refined features that focus on piste and pow.

The Passport is built for deep days and steep days. It’ll be a reliable companion for specialised riding and, while it will prefer a blower day after a couple feet of fresh snowfall, you’ll still get that high-end performance on an overnight light dusting. The stiffer flex and performance oriented construction do place a bit of a barrier to entry here, so rookies might want to look toward something a bit more mellow.

Who Is The K2 Passport For?

You’re a confident rider who prioritises powder missions and days spent carving up the corduroy. Your park days are probably mostly behind you (or you have a specific freestyle quiver deck for party laps). You ride fast and hard and need a snowboard that can accompany you when you want to push your limits.

Okay, so it might not look like the most versatile board in your locker,. And while it can do more than you potentially give it credit for, there’s no denying that the Special Effects is a quiver board. One of the special ones where you wait anxiously for the best conditions to pull it out in and when you do, boy oh boy, is it worth it.

Short, shapely and extremely bodacious, the Special Effects has our pulses racing. We’d classify the Special Effects as primarily a freeride snowboard, but not in the sense that you’d ride it down Corbet’s Couloir, think less ball shrinking descents and more undulating hills covered in fluffy white gold. You’ll want to size down significantly with this one, but just trust the process!

Who Is The K2 Special Effects For?

The Special Effects is admittedly more of a special occasion board. Think surfy turns on blower pow days or party laps slush slashing in the spring sun, that sort of thing. Pretty much any rider who wants something specific to suit those occasions will find a chum here. It might be a bit much for a complete newbie, but otherwise you’re hot to trot. 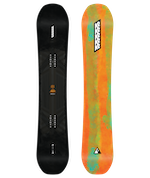 Totally overhauled for winter 22/23, the K2 Manifest intersects at the heart of the venn diagram for freeride and freestyle. Designed to be a true quiver of one, the Manifest takes tried and tested shaping theory and utilises some of the most premium materials at K2’s disposal to create a snowboard that’s at home across a huge range of terrain and conditions. Part of K2’s new Landscape Collection, the Manifest is responsive without being overtly stiff thanks to some clever tech internally. It’ll float like a champ in deep snow, but thanks to the slight directional outline, camber midbody and snappy core, the Manifest gobbles up groomers like nobody’s business. Let us preface this by saying novices need not apply here, the K2 Antidote is one beefy son of a gun that’ll chew you up and spit you out if you’re not careful. That said, advanced riders will find an ultra-responsive cannon that’ll devour technical backcountry descents, throw down big tricks and munch miles on the hardpack. K2 have pulled out all the stops with the internal layup of the Antidote, they’ve used a bunch of carbon to boost response in key areas, shaved weight with clever pre-cured fibreglass inserts and gone with a premium tri-blend of wood in the all-new A1 Core. Full camber isn’t usually the profile of choice for boards that excel in deeper snow, but K2 have used 3D shaping to subtly increase the float and glide, without diluting that traditional poppy camber feel. 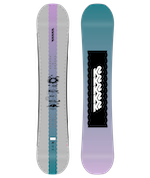 Snowboarding is meant to be fun, right? And there’s not much fun about constantly eating shit, catching edges or faceplanting when you’re trying to improve your riding. Enter the K2 Dreamsicle, a super forgiving and friendly snowboard that puts the onus on progression. By using a flat / rocker profile, K2 have ensured that the Dreamsicle won’t be twitchy or likely to hook up around the contact points, but it also allows you to garner some easy float when you encounter deeper snow. It’s a pretty soft 4/10, and while this will possibly be a bit lacking for full send charging, it gives the Dreamsicle a fun and playful nature. 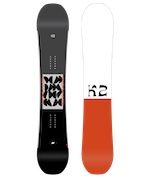 We’d put the K2 Cold Shoulder in the all-mountain category, but erring more towards the freeride end of the spectrum. That’s not to say it won’t be fun to take a few laps round the park, but the directional nature of the board gives you the edge in deeper snow. Tapered outline, rockered nose, setback stance… these are the classic hallmarks of a pow board and the Cold Shoulder has all three. There’s still camber underfoot to drive power on the groomers, with tip to tail carbon stringers offering a lively and dynamic feel and solid hold down the edges. It’s not overly stiff and aggressive, but we’d encourage beginners to look more towards the Dreamsicle. 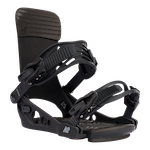 The K2 Meridian binding is first and foremost great value for money, K2 has packed a helluva lotta bang for your buck in here. They sit slap bang in the middle of the flex scale, bolstering their versatile all-mountain credentials. K2’s TriPod baseplate uses, yep you guessed it, three urethane pads underfoot which move in unison with your board. The result is a surfier feel than a traditional binding, with the added bonus of being a shock absorbing material. The straps speak more to a freestyle flair, the Meridian uses K2’s flexiest option for extra mobility when you’re boning out methods. 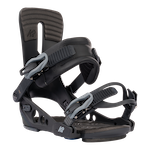 These bindings scream ‘premium’. The K2 Hue is K2\s top of the line women’s offering, aimed at experienced riders who want a binding that will perform no matter the where they decide to ride. The Hue makes the most of K2’s cutting edge technology, including their performance enhancing TriPod Chassis which works in unison with your body’s biomechanics to transmit rider input efficiently and rapidly. The footbeds are slightly canted, allowing your boot to settle into the binding at a more natural angle, which in turn helps to align your knees and hips for less joint ache after a big day on the hill. 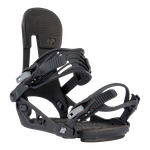 Hang ten dude! The Line Up bindings from K2 are all about surfy turns and super playful riding. They’ll be most at home when you’re pressing and buttering or boning out every grab you have in your bag of tricks. You’ll find a lot of this freestyle finesse comes from the highbacks, these urethane badboys are suuuuper flexible and will bend in a way that a traditional highback can only dream of. Speaking of bend, the Bender ankle straps do exactly that. They’re super malleable to lock in your boot without creating pressure points or hotspots. 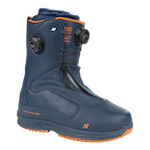 If you’ve been snowboarding for a while, (or are super into riding powder) chances are you’ve heard of Gentemstick. They’re snowboards with an almost mythical quality, they carry around a cult-like status and are widely regarded as some of the best pieces of gear on the market. Taro Tamai is the founder and master shaper behind the brand, so it makes sense that his boot with K2 are basically a love letter to riding the blower powder you can only find in Japan. Think surfy turns in nipple deep snow, throwing up fat rooster tails as you thread your way down the undulating hills and punching your ticket to the white room over and over. Yeah, that’s what we’re talking about. The good stuff.