Usually, an invitation to go drinking with someone you’ve seen trying to piss in their own mouth is one to politely pass up. When it’s JF Pelchat, however, then it’s best to don your waterproofs and go along for the ride.

JF moved from Quebec to British Columbia in the 90s, and it wasn’t long before both his on- and off-hill exploits had achieved legendary status. Even amongst the stacked deck of the hard-charging, hard-partying Wildcats, he stood out.

“In the helis-filming-helis era, another dose of debauchery from BC’s finest could be just what the snowboarding world needs”

Movies including Nine Lives, Lil’ Bastards and Return Of The Wildcats made the crew famous well beyond the streets of Whistler, thanks in part to the hell-raising bonus footage that often exceeded the running length of the movie itself. Their last release was 2007’s Still Bastards, after which we mostly heard from JF in the context of his company, NOW Bindings.

Clearly, though, the Wildcat within remained dormant. Recently he and fellow lifer Devun Walsh got together to direct a new movie, the aptly-titled Wildcats Never Die. In the helis-filming-helis era, another dose of debauchery from BC’s finest could be just what the snowboarding world needs.

Ahead of the London premiere, we sat down with JF to talk about making his movie, running his brand, and juggling the two.

It’s been about a decade since the last movie – how would you sum up the Wildcats to someone who has never heard of them?

Wildcats are all about having a great time with their friends, and sharing their passion about snowboarding on and off the hill.

Who’s idea was it to make another one after all these years?
One of the riders, Charles Reid, came to me a while ago and just dropped the idea in my ear. I had a chat with Devun, and we both agreed it was time, and we moved it forward. It was pretty cool.

“I didn’t have any expectations. I was riding for myself, having a good time, and I didn’t have to please any sponsors”

A lot has changed in your life since the last one – how different was the process of making Wildcats Never Die?
I think I’m the only one that has a part in the movie that wasn’t an active professional at the time we decided to do it. So it was definitely harder for me to come out and film, but it was a really great experience because I didn’t have any expectations. I was riding for myself, having a good time, and I didn’t have to please any sponsors. Just riding with the homies, like it was before my career started. It was scary at first, but once I got in the rhythm it was fun to do.

You’ve got a business to run. Was it hard to balance that with riding and filming?
Super hard, yeah. I couldn’t go out and ride all the time. It was supposed to be a one-year project but the snow was really bad, so we made it a two-year project, and that was good for me. I’m running a business, I’ve got kids, I can’t go ride every day, right? It was challenging, but we made it happen – and once you get out in the backcountry with your homies, it’s totally worth it.

“The Fourth Phase? It’s hard for a snowboarder to find themselves in that movie”

These days there aren’t many people who make their living with snowboarding that also like to party as hard as you guys did. Do you feel like it’s something that’s missing from snowboarding today?
That’s another reason we decided to make this movie. When you look at X Games and everything, it’s not relatable for most snowboarders, and I feel that we’re losing touch with a lot of those people. The core is the core, and will always be there, but we need something that caters for the beginners and the weekend warriors as well as the pros. We feel that the Wildcats does represent a lot of what’s going on behind the scenes in snowboarding. There is a lot of cool stuff out there though, cool movies. If you look at what Halldor [Helgason] and those guys are doing, they’re Wildcats for sure.

What did you make of The Fourth Phase?
It’s not a movie for snowboarders, let’s get this right. They’ve made it for the general public. It’s hard for a snowboarder to find themselves in that movie.

Our reviewer suggested that it’s a mistake to take snowboarding as seriously as that movie does, and lots of people criticised him for it. Are they wrong?
I would say to those people that they have no idea about the history of snowboarding. I’ve seen it for over 30 years. When [Shaun] Palmer got banned from Japan… The Whiskey guys, that was really raw. Honestly, there’s room for everybody – what Travis put out, it’s not something that’s bad for snowboarding, it’s just not really relevant for us. 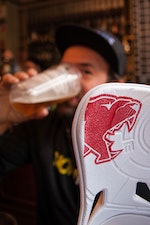 So what should we expect from Wildcats Never Die?
A really fun movie that you can relate to, even if you’re a weekend warrior. It’s telling the story of the Wildcats, how we got together, but there’s also passing the torch to the new kids. It’s really entertaining.

Will there be another movie in ten years?
Fuck, I’m gonna be 53 man!

Yeah, but if I asked you ten years ago if you’d make another one when you were 43, what would you have said?
I would have said no. So I guess maybe yes!

Your kids could have full parts next time…
Exactly, and they’ll be giving me shit! “Come ON!…”

What’s the idea behind NOW bindings?
The technology that NOW uses is called Skate-Tech, and it’s something that helps you turn your snowboard, reduces foot fatigue and improves board control. Bindings hadn’t really changed in 30 years since the introduction of the highback – I’m not saying that the bindings out there are bad, it’s just that we are bringing something new. When you pair it with a good snowboard, it makes your day more enjoyable.

NOW has been up and running for four years. What do you prioritise from season to season, in terms of improving the bindings?
It’s about refining, figuring out the kinks. I want to make sure that the gear people are riding lasts. There have been times when we’ve failed on some part of it, but we work it out. It’s all a learning curve, and we are stoked that people have stuck with us. At first we had just one model, and now we have ten.

“If you spend half a day on the NOW, then try your old bindings on the same board, you’ll feel the difference”

You worked a little on snowboard technology before starting NOW. Do you continue to look at other aspects of snowboard gear, and how they can be improved?
Until I’m completely satisfied with where NOW is, I’m still going to be fully involved with it. Every year we come up with new technology, and it’s getting better and better, like with our new strap. I’m always thinking a little about other stuff, but at the moment I’m prioritising NOW.

Some of the feedback we get at test events is that it’s a matter of preference, almost like camber vs rocker. Do you think that’s valid?
Honestly, I don’t see why anyone is still riding conventional bindings. We’re not looking to take over the whole market, but the advantages of the Skate-Tech system are insane. Your board feels so much more alive, and foot fatigue is decreased. When I’m at some tests, people are trying it with a new board at the same time, and they want to try so much gear that they often don’t spend enough time on them either. It’s not a real test. If you spend half a day on the NOW, then try your old bindings on the same board, you’ll feel the difference. It’s not like you have to re-learn how to snowboard – it’s subtle. Some people have said “Dude, I’m scared they’ll screw with their style”, but it’s nothing like that.

At first it was mainly freeriders that adopted your bindings – Jeremy Jones, Devun, Helen Schettini. Is that because they work best for that kind of riding?
I think they excel way more in the park, where you need to have your edges. The harder and shittier the snow, that’s where they really shine!

What’s the story behind the limited edition Wildcat binding?
It’s based on the NOW Brigade – we didn’t want to go too high end, because we wanted a wide spectrum of snowboarders to enjoy it. It’s to support the movie, but also all the diehard fans that have followed us for so long. NOW is made by riders, for riders. People have seen a lot of companies come and go, and they’re often all about money, but I design products for riders, that help riders have a good time.

Wildcats Never Die is out on 27th October, available from iTunes.

Wildcats Never Die!
We use cookies on our website to give you the most relevant experience by remembering your preferences and repeat visits. By clicking “Accept All”, you consent to the use of ALL the cookies. However, you may visit "Cookie Settings" to provide a controlled consent.
Cookie SettingsAccept All
Manage consent