(Above: Grilo in the backcountry. Photo: Sani Alibabic)

Snowboarding lost a legend yesterday. Marko “Grilo” Grilc has sadly passed away during a tragic accident while filming in Sölden, Austria.

Marko grew up in Slovenia and landed his first sponsorship at the age of 14. With limited riding opportunities at home, he ventured to eastern Austria to hone his craft.

Grilo was a relative unknown when he appeared in David Benedek’s 91 Words For Snow, but once the movie was released he didn’t stay anonymous for long. This – plus his contribution to The Gap Session – cemented his reputation as an amazing all-round talent who always knew how to have a laugh.

The decision to give him his own web series was a no-brainer, and Grilosodes remains one of the most entertaining shred shows on the internet. It even took him to Dubai and the Halifax dry slope.

For the community, it was his genuine gratitude for snowboarding that made Grilo’s signature video series so fun to watch. He eventually became an international ambassador of freestyle — a platform he used to hype the next generation on riding. 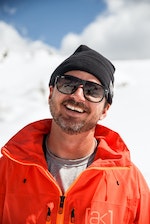 Countless tributes and words have already poured in for Grilo, but we’ll leave you instead with some words from the man himself, taken from his recent snowboard film, Disconnected:

“Snowboarding is so simple, you know, it’s basically just shredding down the mountain on a piece of wood. Just the stoke that you get from riding, from doing a sick line, as I saw out here, it’s unreal. And I’m sure this crew of people will have stories to tell for years to come.”

The whole Whitelines team send their thoughts and condolences to Marko’s fiancée Nina and their children, his family, and his friends around the world.