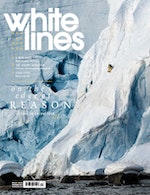 If that picture doesn’t make you do a double take (and maybe let out a slightly mincing involuntary gasp) then you should probably check your pulse. It’s Xavier de le Rue (who else?) earning his second Whitelines cover with a frankly insane descent down some Antarctic iceberg towards the freezing southern ocean. Yep, nutter.

But that’s not the only crazy thing going on in this month’s mag, check this competition for starters…

WIN THE TRIP OF A LIFETIME TO WHISTLER

We’ve teamed up with Whistler to give you the chance to win an epic trip to their resort, including flights, accommodation and the full works. All you have to do is find the golden goose…

Billy Morgan emerged seemingly from nowhere to win the British Big Air Championships in 2010, and went on to take UK snowboarding by storm. With his place in Sochi all but assured and a string of competitive successes to his name (not to mention one of snowboarding’s biggest ever viral videos) we thought it was high time we caught up with this easy-going jester to find out what makes him tick.

RAILS ACROSS RUSSIA with ROUTE ONE

Last winter, Whitelines joined forces with the Route One team on a train trip across Russia. They covered nearly 1,000 miles, shredded in three cities, and met some of the coolest (and craziest) individuals you could ever hope to come across. This is the story of their trip.

CHAMALEON: THE COLOURS OF SNOWBOARDING

Markus Keller may not be a household name in snowboarding, but all that looks like it might be about to change with the release of this movie. Backed by Volcom and Red Bull it follows the Swiss all-rounder across the globe as he hits well, everything, from street spots to AK lines, adapting to each different type of terrain as if it was his natural habitat.

Xavier de le Rue has been pushing the boundaries of freeriding for a few years, but he’s never gone this far before. He and Lucas Debari went all the way to Antarctica last winter in search of next-level lines. What they found was sheer insanity…

PLUS:
We put the best impact shorts (aka arse protectors) to the test
Scott Penman tells you how to ride hips
We get the locals tour round Tignes from Will Hughes
6 mid-range boards reviewed
Spotlight on Castleford

There’s at least enough for a month’s worth of toilet breaks there, and it can all be yours for a mere £4.95. So why not pop down to Smiths and grab yourself a copy?

The Team touch down in London for the Naturally premiere

The Team touch down in London for the Naturally premiere

Solid riding from the ladies with Lipstick Productions

Damn this is quite some part!

Emilien Badoux - Rip Curl Video Part
We use cookies on our website to give you the most relevant experience by remembering your preferences and repeat visits. By clicking “Accept All”, you consent to the use of ALL the cookies. However, you may visit "Cookie Settings" to provide a controlled consent.
Cookie SettingsAccept All
Manage consent