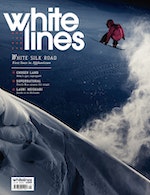 The air is getting fresher in these parts and the beanies and hoodies were out for the first time in months this morning, which can only mean two things: 1) winter is happily skipping on it’s way and 2) the first proper issue of the season (not counting our Buyers’ Guide) has arrived!

With a freshly redesigned mag that’s bursting with rad new features, and all of your Whitelines regulars, issue 103 is not to be missed. Here’s a sneak peek as to what’s inside that classy cover:

NIKE CHOSEN SESSIONS
With a park that’s surely up there as one of the most insane ever built in Europe and a whole load of pros, ams and film crews thrown into the mix as well, the Nike Chosen session was one of the standout events of last season. We take a behind the scenes look at what went down in Montafon.

LIVING THE DREAM: LAURI HEISKARI INTERVIEW
The baby faced Finn has been dropping memorable video parts for the best part of a decade now. We caught up with Lauri to talk about learning the ropes in powder, hitting rails in Finland and the current state of the industry.

We pay our Tribute to Nelson Pratt.

Ollie Dutton teaches you how to ride a donkey dick rail.

We test out boots that cost under £180

You can get all of this and more at WH Smiths and other reputable newsagents around the country for a meagre £4.95, but why not save some a few more pounds and get extra freebies by subscribing?

The December 2014 issue of Whitelines is on the shelves now!

The November 2014 issue of Whitelines is about to hit shelves!

Issue 116 - November 2014
We use cookies on our website to give you the most relevant experience by remembering your preferences and repeat visits. By clicking “Accept All”, you consent to the use of ALL the cookies. However, you may visit "Cookie Settings" to provide a controlled consent.
Cookie SettingsAccept All
Manage consent