THEY SAY: For intermediate and advanced freestylers who make jibbing a priority.

WE SAY: A jibby little snub-nosed twin that won’t cost you the earth, so you can still afford to buy a beer when you get down from the park – it’s all about having fun remember?

TESTER SAYS: “Light and snappy and actually pretty quick for a jib board.”

THEY SAY: A fun board to jib around.

WE SAY: Bataleon’s jibbiest stick. Like the rest of their range, this benefits from ‘Triple Base Technology’, which means it’s really hard to catch and edge. It’s a bit soft for euro-carving, but if you’re looking in this section you’re not into that anyway.

TESTER SAYS: “The flex creates a soft buttery, jibtastic feel – there is no way you’re gonna fall off!”

THEY SAY: Spark up the park.

WE SAY: A park board ‘V-Rocker’ tech and the big B’s branding for a ridiculously cheap price. OK so it’s not the fastest stick around, but it’s flexible, fun and easy to butter and spin. What more do you want from a jibstick?

TESTER SAYS: “Super-easy to ride and bounces nicely when you press it.”

THEY SAY: Power ballads through the park.

WE SAY: A sweet little jib stick that combines Burton’s ‘V-Rocker’ with ‘Mid Spoon’ between the bindings. This means it’s super-playful and frisky. Perhaps a bit twitchy at very high speeds, but you’ll never catch an edge again!

TESTER SAYS: “The perfect park board! V-rocker works amazingly as it is so predictable and easy to press.”

WE SAY: An easy butterin’, easy-pressing stick for jibbers who want to steeze it up, new-school style. The ‘Fun Kink’ rocker profile keeps this lively as anything. It features Capita’s cheapest core, so it’s not the techiest stick, but who needs that for jibbing?

TESTER SAYS: “Turns everything into a playground.”

THEY SAY: Back from slaying the parks and streets for the last two years.

WE SAY: With its super ‘Anti-Camber’ profile, this board is built for butters and presses. DC’s cheapest core means it’s not the most lightweight, but it’s designed to take a battering and live to tell the tale.

TESTER SAYS: “Locks well onto rails, poppy on the nose and tail, wicked for frontflips.”

THEY SAY: One of the most progressive park boards on the market.

WE SAY: Dinosaurs Will Die have given this board a rocker shape for easy presses and butters and blunted the nose and tail to help reduce the swing rate. While this means it’s not much of a floater in pow, it makes it sick in the park.

THEY SAY: The best urban board made.

WE SAY: Forum have put ‘Pop Camber’ into this board, making it responsive and improving its ollie power. It may not be quite as buttery as some jib boards, but the larger pop zones mean it’ll press just as well as any rocker stick. It’s tough as nails too.

TESTER SAYS: “Massive pop, and presses like a beast. Such a classy graphic too!”

THEY SAY: Step it up kid.

WE SAY: One of Forum’s classics, this proves popular year in, year out thanks to it’s combination of sick all-round performance and affordability. It’s not the softest of jib boards, but it’ll handle stuff outside of the park as well. Choose the ‘Chilly dog’ version for amore buttery ride.

TESTER SAYS: “Fantastic board for hitting the park and blasting round the piste too!”

WE SAY: Gnu have taken Mervin’s banana tech and made it into one of the sickest jib sticks around here. Like most jib boards it’s got a softish flex and a twin shape – unlike most it’s got a sintered base, making it more expensive, but better at speeds.

TESTER SAYS: “A sick stick for jibbing, but handled well on piste too.”

THEY SAY: Stricken with a violent addiction to freestyle progression.

WE SAY: K2’s rail rider benefits from their ‘Jib Rocker’ profile, which lifts the contact points for catch-free urban shredding. It’s got a cheap extruded base, but that means it’s tougher than a lot of sticks.

TESTER SAYS: “You will see tons of these in indoor slopes but also great for the rider wanting a playful board for the side of the piste.”

THEY SAY: LNP’s skate for the snow.

WE SAY: With design input from Laurent Nicolas-Pacquin himself, this was always going to be a playful, jib-focussed stick. It’s got pretty much the softest flex in this guide, so it’s not the best on edge hold, but railboards don’t get much better than this.

TESTER SAYS: “Makes buttering super easy, great for jibbing all over the show.”

THEY SAY: Create and destroy.

WE SAY: This is unusual amongst jib sticks because of its fl at base profile – this gives it more pop than most rocker boards, and that super-soft fl ex mean sit still presses nicely. Maybe a bit more prone to edge catching, but it works for Jed Anderson, and there’s not many better than him on a rail.

TESTER SAYS: “The ultimate board for the indoor railstrips out there. Oh and sick graphics!”

THEY SAY: All out freestyle annihilator.

WE SAY: Smokin’s park stick may be stiffer than most of the other boards in this section, but it still handles rails pretty well. It also does a nice job on kickers and the ‘Magne-traction’ means it even holds a reasonable edge on piste.

TESTER SAYS: “Fun, jibby board. Nice for buttering and edge hold is OK for a reverse camber board!” 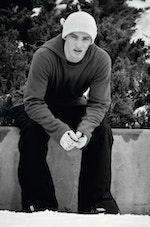 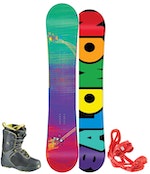 http://mpora.com/videos/16aYS8Nrf So… last season the guys from Signal decided that a little road trip was in order. They stuck out the hitch-hiker’s thumb and...

Watch the best bits of the weekend's action

http://mpora.com/videos/16aYS8Nrf So… last season the guys from Signal decided that a little road trip was in order. They stuck out the hitch-hiker’s thumb and...

Watch the best bits of the weekend's action

Mayrhofen's Penken Park gets a good seeing to

The coolest park feature ever?