Mike Parillo must be one of the biggest dudes in snowboarding – in every sense of the word. His imposing figure has featured heavily in the sport since the early days of the eighties, when he helped shape the world’s first purpose-built parks at Bear Mountain, near his native LA. Since then, Mike has had a career as both a pro-rider and a team manager for Volcom, before quitting to concentrate on his art. Throughout the nineties his work featured on both Burton and Lib Tech boards. His latest venture, which he established with his good friend Travis Rice, is an online art gallery based in Jackson Hole, Wyoming. We caught up with him at the Asymbol headquarters to talk about his designs for Travis’ Lib Tech pro-model.

How did you start working with Travis?
We met like briefly a couple of times. I’d been hearing about this crazy kid who was living in Jackson you know, and he was like 13 when I lived here before. Then one time we were at some morning after party and I was basically hitch-hiking home, walking down the street in San Diego and Travis and his crew picked me up and we exchanged a couple words and jumped out. And I saw him at Guch’s [legendary rider Bryan Iguchi’s] wedding up here in Jackson and he came up to me afterwards and asked me if I wanted to do his graphic! At the time I was living in LA, and he came to LA and we started talking about stuff and these paintings came out of it.

This is the third pro-model you’ve done for him right? But there’s a couple of gaps in between – like last year’s board wasn’t your design. How did that work?
I did them basically every other year, cos it kind of seemed right. We didn’t want to go straight into that second graphic after the first one, cos it was a really powerful graphic. You know, it really hit hard – no-one had ever done anything like that before. Also I didn’t want to have to compete with myself. So I just skipped a year, then did it, then skipped another year, then did this most recent one. But now, because I love the year 2012, I want to work for that so I’ll do next year’s.

What’s the idea behind the board?
With each one, Travis just gave me a different theme. So the first one the theme was ‘Balance and Conflict’, then the second one we did in New Zealand during the filming for That’s It, That’s All. And that theme was ‘The hydrological cycle and man’s influence on the environment’, and this new one the theme is ‘the influence of the media on children’. So you have the kid sitting in the middle that eye that sees everything, and the TV stuff, and the semi naked girl on the side…

And Travis would literally give you those sentences and then you’d come up with the whole painting?
Yeah pretty much. He’d say it and I’d run with it and take it where I wanted.

So are there elements that connect the three boards, because those are pretty disparate themes.
Yeah, the only thing I kind of put in there that connects them all is those symbols – so the first one is the anarchist A, and the second one is the water droplets for the hydrological cycle. That was a Quiksilver symbol actually that I kind of worked in. And then I combined them for the new one so in the middle there’s that same anarchy-looking thing, but with sort of roughed up edges so it’s like I took the drops and turned them into the edges. That’s kind of the main thing that links them. And then there’s the way that the boards are laid out – the original paintings have the same symmetry.

Finally, you’ve worked in snowboard graphics a long time. Do you see any trends forming or think that there’s any particular way graphics are going?
To tell you the truth I don’t even look at that stuff. I don’t really look at the art on the board, I just kind of look at the original paintings. With [Asymbol] Travis and myself are more trying to document the art that comes from the people in snowboarding, not just the snowboard graphics, but of course there’s paintings from game-changing graphics in there as well. 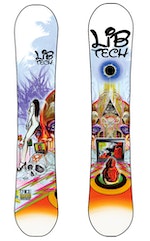 Check out Asymbolgallery.com to see Mike and Travis’ project for yourself.

Two tricks that'll make you go OMFG!! Or something...

Without this man, snowboarding as we know it probably wouldn't exist

Two tricks that'll make you go OMFG!! Or something...

Without this man, snowboarding as we know it probably wouldn't exist