Shaky GoPro footage is the bane of the internet, inducing boredom and headaches whilst watching your mates’ action sports footage that somehow isn’t as epic as the ads would suggest. The solution? You can either use the much-abused ‘warp stabiliser’ digital effect on your editing program of choice, which makes it look like you filmed everything through a plate of jelly, or you can invest in one of these bad boys: a GoPro specific, handheld gimbal. The REMOVU S1 GoPro gimbal, to be precise.

Here at Whitelines we’ve played with a few different camera stabilisers – everything from cheap Chinese knockoffs to full-size DSLR rigs – so we were excited when the REMOVU S1 showed up at the office… In summer. Without much snow/any snow at all to test it out on we decided to go topical and found a ‘fields of wheat’ substitute to run it through instead.

“World’s first rainproof 3-axis gimbal made for GoPro cameras – REMOVU S1 is a 3-axis gimbal for GoPro camera. The S1 can be mounted anywhere a GoPro can be mounted. Mount it to your body, a bike, a helmet, wherever you can mount a GoPro. The S1 also comes with a detachable hand grip that is equipped with a wireless joystick remote, which will allow you to control your gimbal from a distance. REMOVU S1 is simply the best gimbal that anyone could ask for.” 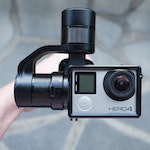 Straight out the box the S1 is pretty simple to set up. Pop a GoPro into the housing (there’s separate boxes for the HERO 5 and younger models, as well as a mount for the Session) and twist it into the gimbal, easy. There’s a grip that slots into the bottom if you want to take it handheld, as well as a standard GoPro clip to attach it to any existing mount. The grip has a thumb-operated stick that makes switching between modes a little easier, and it also acts as a controller for panning and tilting the gimbal wirelessly. Now, I’ve had issues with wireless devices on shoots pairing before, but the remote connects automatically, instantly and without fuss. Amazing.

The build quality is good – it feels solid in your hand without being too heavy, and even with a mix of plastic and metal materials it seems pretty robust. REMOVU reckon that it’s rainproof and waterproof – we didn’t test the former but the fields we naughtily ran through caked it with dust and pollen with no discernable effect on the gadget. Compared to the piece-of-shit Feiyu G4 gimbal I once owned – and was forced to chuck in the bin after two goes – this thing is bombproof.

It comes equipped with three modes: lock, where the camera stays pointing in one set direction; pan, where it follows the direction you’re pointing but won’t tilt up or down, and follow, which lets it point in any direction, but stable. It’s easy to cycle between modes either directly on the gimbal or via the remote.

But does it stabilise though? For the money they’re asking you’d hope it would – it’s £60 more that the equivalent Karma Grip which will connect directly with your GoPro. We gave it a few tests involving walking and running over rough terrain capturing scenics as well as tracking a fast-moving Australian Shepherd. It’s good, though not perfectly smooth, but you should know if you’re planning on buying a piece of kit like this nothing this small will be – there’s simply not enough weight. That’s a good thing for action sports as it means you’ll be carrying less, but you shouldn’t be expecting cinema grade shots out of the camera.

Does that even matter though? In short, no. Look at the shots right at the end of the video above – when it’s tracking something interesting you focus on that dynamic subject. Look past that and yes, the horizon is wobbling a bit, but no one will notice or care. The same will go for snowboarding footage if it’s exciting enough, if it’s not you’ve got more problems than just kit. It does a good enough job that if you really are after a perfectly stable horizon for scenic shots, a little bit of warp stabilisation in post production (10% in Adobe Premiere Pro) works pretty well. Again I’ve demonstrated this in the video.

In short, it’s as good as anything will be at this size, and given that the protective case will fit comfortably inside the average avalanche pack it’ll be great for taking up the mountain.

Now for the bad:

For some reason that escapes me, the designers have chosen to mount the GoPro to the REMOVU S1 on the same side of the camera as the settings button, meaning it can’t be accessed on the fly. You can get to the ports on the other side, though why you’d want to plug it into a TV via the HDMI socket whilst you’re using it in the rain is beyond me. This is a massive error as it makes it incredibly difficult to change video settings without disassembling the thing or using a GoPro remote or phone, which have never been that reliable for me, especially on a cold mountain. It’s probably something to do with connecting one of REMOVU’s waterproof mics to it, but seeing as they did such a good job with the wireless connection on the remote it seems they could have worked around this.

“The record button ends up sitting right underneath the gimbal, which makes it incredibly difficult to turn on”

The record button ends up sitting right underneath the gimbal, which makes it incredibly difficult to turn on without, again, a phone or GoPro remote. In REMOVU’s world you’re already carrying the camera, the gimbal and gimbal remote, so to add something else to the mix makes no sense. It’s annoying that they’ve messed up two ergonomic issues here, as they’ve clearly thought about the design really well in other places – for example, the bottom of the handle has a secret compartment for storing two extra memory cards, which is a genius use of space.

When operated, the pan and tilt modes make a really loud whirring noise on camera – you can hear it at 1.12 in the video above. This isn’t a problem if you are a professional with experience dubbing audio, but if you’re not you’ll just have to mute the audio.

Finally, the clips and switches that allow you to put it together and break it apart are quite small and fiddly. Probably not an issue if you want to shoot spring park laps, but for mid-winter backcountry shredding I’m not convinced it would be that easy to use.

The REMOVU S1 is a good piece of kit, offering footage that can be made to look very ‘professional’ in post-production, and very good straight off the camera. Like, as stable as any normal person would ever need a snowboarding shot to be. It’s lightweight and portable, and does its job very well, it’s just a bit fiddly and annoying getting it ready to do it. If there’s ever an S2 there’s some ergonomic issues that can be improved upon.

It has three competitors. First, this easily outstrips anything made by Feiyu Tech, which are cheap in comparison but are also extremely cheaply made and get easily rinsed by the natural elements. Then there’s the DJI Osmo – we think these are great, but if you already have a GoPro the REMOVU S1 works out as cheaper. If you don’t have a GoPro, this still gives you way more in terms of mounting options, so then it comes down to whether or not you want something more than just handheld.

Finally, is the REMOVU S1 better than a GoPro Karma Grip? We’ve never had the chance to test one so we can’t comment on the actual stabilisation quality, but again the S1 gives you more options to mount it – if you discount the Karma’s drone that is. The REMOVU is less bulky, though it is a little heavier, and although the prices are in the same ballpark, the Karma does come cheaper. Instinctively, I’d say having a handheld camera that you can operate from the handle would be like on the Karma would be less fiddly and more useful for my kind of shooting, though again we’ve not had a chance to test it yet!

Hilarious Footage Of An Early GoPro

Hilarious Footage Of An Early GoPro