A few weeks ago we took out the REMOVU S1 GoPro gimbal – promising video stabilisation at a price similar to GoPro’s own Karma grip – for a test run. For the most part, we were pretty impressed with its smoothness, robustness and versatility, especially compared to other products we’ve used and abused in the past, though there were a few design compromises that made it far from perfect.

“For the most part, we were pretty impressed with its smoothness, robustness and versatility”

So we were excited when, on a shoot last week, we managed to get our hands on the DJI Osmo to test. Whilst it, the Karma and the S1 are all similar products, the latter are both designed for GoPros, whilst the OSMO takes DJI’s own ‘X’ series of cameras, the same that go onto their Inspire and Phantom drone systems. The same but different then – let’s see how it got on.

“Reimagine movement. Motion without blur. Action shots without shake. Perfect video even when you move. Thanks to advanced technologies specifically designed to keep the camera flat no matter how you move it, the DJI Osmo helps you record videos and take photos like never before. It is much more than just a camera. It helps you create with more freedom than ever.”

Uh… Wow. In terms of ergonomics and usability, the DJI OSMO is idiot proof. And by that, we mean even the likes of Homer Simpson could pick it up and get a handle on it pretty quickly. You turn it on and straight away it sets itself up for follow mode, where the camera will smoothly point at and stabilise whatever you’re shooting. Hold the well-placed trigger and it will stay locked in one plane for panning past subjects, double tap it to realign it with the horizon and triple tap it for selfie mode.

Want to adjust where it points? There’s a thumb-controlled joystick for that, or alternatively, you can just use your meaty paws to point it where you want. So. Simple. That’s pretty much all the usability functions you’ll need for 99% of videos. In three sentences. That is how easy to use the OSMO is.

You can’t put a price on tech that does so much work for you, allowing you to concentrate on what you’re trying to capture rather than controlling a complicated piece of equipment. That same usability carries on to the DJI GO app, which lets you use your phone as a monitor for filming or to review shots, as well as adjusting settings. Connecting the two is incredibly simple, and again in terms of handling, it’s one of the best functioning bit of technology we’ve ever come across. The way the phone can fit onto the OSMO itself is great as well, instantly becoming part of the handle and your focal point of use.

“In terms of handling, it’s one of the best functioning bit of technology we’ve ever come across”

That’s how you use it – how does it perform? Whilst similar to a GoPro Hero5 in terms of sensor resolution, the OSMO’s standard X3 camera looks a lot less fisheye and doesn’t have that ‘GoPro look’. The 20mm-equivalent lens has a 94° field of view compared to the GoPro’s 118°, so while it will fit less in the frame all the lines will be nice and straight, giving a more cinematic look. Which you like best is down to personal preference. 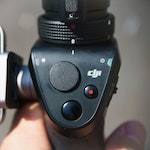 For HD nerds, the OSMO can shoot 4K at 25/30 frames per second, which is the same as the latest and greatest GoPro, though it does lack in the slo-mo department, only shooting up to 50/60 fps at 1080p. However, it can shoot in D-log, a very ‘flat’ picture profile that allows greater flexibility in post-production if you’re into grading, but will also do a fine job in its normal mode in terms of colour management. The lens also has a filter thread if you want to attach any of DJI’s UV, polarising or ND filters for extra video flair.

If you couldn’t tell by now, we really liked the OSMO. There were, however, a couple of key points we thought are worth a mention.

It’s not the most robust piece of kit we’ve ever seen. Don’t get us wrong, it’s not fragile either, but one medium-sized drop onto a concrete floor during our shoot saw the attached UV filter shatter immediately, though the rest of the gimbal did stay in one piece. Where the GoPro goes for plastic lens for endurance, the OSMO plops for glass instead to focus on optics – this should be kept in mind if you’re making a choice between the two.

It’s also a concern specific to filming snowboarding that the OSMO has a cooling fan on top to keep all its magical inner workings running. In other words, there’s effectively a giant hole leading to the delicate electronics, not ideal if it’s snowing outside or if you drop it on the piste. You can’t really blame DJI for this as it’s not primarily designed for action sports, but again it’s worth mentioning.

Finally, the designers think you have to adopt the hilarious gait below to use it properly. A prime ministerial shuffle in the Ministry Of Silly Walks. Thank god riding downhill on a snowboard is already pretty smooth…

If you’re thinking about buying the OSMO, it’s more than likely you’re also considering getting a GoPro and either the Karma or the REMOVU S1. If you already have a GoPro, it has to be said it’s a bit of a no-brainer, as getting just a gimbal on its own is far cheaper than coughing up for everything in one go. If you’re getting everything in one go, the OSMO is definitely more cost effective, giving you everything for £519 instead of the £700 minimum to get both components from GoPro.

Cost aside, the OSMO is much easier to use, and with a bit of practice will yield more ‘professional’ looking videos with its narrower field of view – whilst a GoPro has to be adaptable for many uses, this does one thing really, really well.

As with most camera kit, in the end it comes down to personal preference, and the choice here is simple: do you value ease of use over ruggedness? If so, get yourself down the shops and at least try out the spectacular DJI OSMO.

We tested and reviewed the Removu S1 GoPro gimbal - is it any good?