They might be fairly new on the scene, but Swiss brand WEST caught everyone’s eye in 2016 by producing one of the most expensive boards on the market. La Supreme was a handmade collab with legendary shaper Reto Neiger, coming in at an eye-opening £1500. Whilst the rest of the line isn’t quite the same spec, they’ve certainly impressed at recent tests and the WEST team – including Billy Cockrell and Elena Koenz – certainly seem hyped.

In 2017/18 West also did an exclusive collab with French rap legends IAM, as well as another appearance by Lucas Beaufort’s critters on another collab with We Ride in Iran, a Swiss project to provide a snowboarding infrastructure in the Middle East. In more recent years, the brand has also tapped into the splitboard market by introducing the big Mountain Split, the Muveran, and the Powder Split, The Grammont.

Once again, it’s a small but exciting range from a small brand, so if you’re fed up with the big boys in the business it might be worth taking a look at WEST Snowboards.

Scroll down or select from the links below to check out our reviews of this season’s best West Snowboards. New isn’t necessarily better. That’s why La Hache has been West’s flagship model since it was first launched in 2017. This all-mountain board has seen a facelift since day one with a wider tail and nose shape. Carbon stringers run from tip to tail, maximising the board’s pop, plus the IS7200 base ensures ultra-fast speed when you’re straight-lining. Sustainability wise, these guys have good eco credentials; the top sheet is plastic-free and the design is etched on with water-based ink. La Hache isn’t cheap, but it is crafted using premium materials in small batches by an independent manufacturer, so that’s worth supporting. 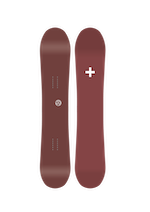 When it comes to high-performance, all-mountain boards, West delivers. Designed for female shredders, the Arvine is a little stiffer than most women’s boards, as a result of the double carbon stringers. However, this means greater steadiness at high speeds. The deck itself is made up of three types of wood: ash, bamboo and paulownia, which looks just as beautiful as it is functional. With its camber-rocker profile, it rides smoothly on icy groomers as well as deep powder. Scandi design fans will like the minimalist look; it’s so aesthetically pleasing, we wouldn’t blame you for mounting it on your wall over summer.

SPY+
We use cookies on our website to give you the most relevant experience by remembering your preferences and repeat visits. By clicking “Accept All”, you consent to the use of ALL the cookies. However, you may visit "Cookie Settings" to provide a controlled consent.
Cookie SettingsAccept All
Manage consent