We first checked out Bataleon’s new powder board at Ispo last year and while their marketing dude was explaining to us that they’d decided to name it the Camel Toe (with a massive smirk on his face we might add), we stood there pondering why they’d opted for a mellow black topsheet rather than a, well, more graphic one. Needless to say we weren’t the only ones thinking it and a year later Bataleon have gone and cooked up pretty much what we’d had in mind… 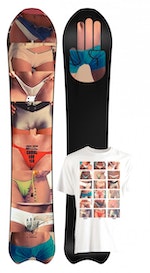 Only thirty of these bad boys (or should that be bad girls?) have been made and feature “a stack of 8 top quality camel toe photos on the topsheet” which is apparently, “enough to keep you entertained on even the longest chair or T-bar”. Now is it just us or is there something a little sus’ about silver hotpants in the middle there? Either she’s trying to smuggle someone’s last Krispy Kreme without anyone noticing or she is in fact, a he.

The Camel Toe is a fully directional snowboard, with a mid-soft flex and POW TBT – which basically means the nose is shaped like the front of the Titanic, which, unlike the Titanic, should make it float real good.

For more info and to get you hands on one of these eye-poppers while they last, head here.