Anything that encourages more people to shred can only be a good thing in our book; last weekend saw Burton bring their Riglet Park concept – an idea to encourage kids as young as three to shred – to Snowtrax in Christchurch. Here’s how it went down from the guys in charge: 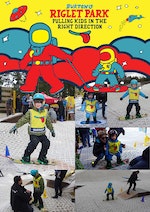 Last Saturday Burton Snowboards took over a section of Snowtrax’s dryslope in Christchurch to get the next generation of shredders started. The Riglet Park gives children a chance to experience snowboarding from the ages three to six. On the day we were graced with a decent patch of fair weather in amongst the storms that have been battering the south coast these past few weeks, so Mother Nature obviously approves!

Over 87 kids turn up to experience snowboarding in the three hour session. There were lots of kids wanting to be the next Jamie Nicholls or Jenny Jones; the Olympic Games are already showing positive signs of attracting the younger audience to snowboarding.

The kids put the Riglet Park through its paces, as well as the team of budding young instructors towing them round. There were gold medals being handed out left, right and centre, claims of ‘never skiing again’ and most importantly, lots of happy faces not wanting to wait to show off their certificates at school on Monday. The Burton Riglet Park really did give these kids a taste of snowboarding, so much so the Saturday club for the following weekend has filled up fast.

The success of the Burton Riglet format continues, so keep your eyes out for more events coming soon. If you would like your kids to learn to snowboard don’t hesitate to give Snowtrax a call on 01202 499 155. Or find us online at www.snowtrax.eu

First look at the practice session on this spined creation

... as well as Bern, POW, Boombotix, X-Sories and Contour

First look at the practice session on this spined creation

... as well as Bern, POW, Boombotix, X-Sories and Contour

Pow Heaven From The Sane! Crew

Blue skies, freshies, bouncing through pow pillows like a kid in the IKEA ball pond.

'Shorter' - Jeremy Jones gets the spoof treatment
We use cookies on our website to give you the most relevant experience by remembering your preferences and repeat visits. By clicking “Accept All”, you consent to the use of ALL the cookies. However, you may visit "Cookie Settings" to provide a controlled consent.
Cookie SettingsAccept All
Manage consent