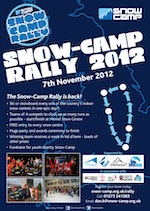 The all round good guys at Snow-Camp, a snowsports charity that takes disadvantaged inner-city youths and teaches them to Ski and Snowboard, are running their annual rally. The event sees teams of four intrepid individuals racing across the UK in 12 hours to try and get as many snowdome laps in in as many places as possible. Before (naturally) finishing off with a good old fashioned knees up in Hemel Hempstead.

The round trip works out at about 415 miles (excluding Burger King de-tours and navigational mishaps). Throw eight boots, four snowboards and four sweaty individuals into the equation and you have a recipe for what Ed Leigh described as “the closest thing to the Gumball Rally in the UK”. Except without the supercars – well, unless you happen to be lucky enough to own one of course.

The charity aims to raise £20,000 over the course of the rally. But as well as helping a good cause, you also stand to benefit yourself – if you manage to get the most runs in collectively they’ll pack you off to Val d’Isére for a week’s stay, and the top fundraiser in the team will get a cheeky helicopter trip!

To find out more and sign up, head over to the Snow-Camp website! Good luck to all that enter!