Last weekend saw Glencoe ski resort mark its 60 year of operation. As well as a torchlit descent and fireworks display, invites went out to some of those who helped get the tows running back in the 1950s. Chief among them was the now 98-year-old Philip Rankin, who first proposed the construction of the ski centre after becoming bored with the day job.

Despite admitting that his team’s initial installation of a lift at the top of the hill – a long walk from the car park – was “arse-up from any sane way of doing it,” it was still the all-important first step that led to six decades of good times, and counting.

For Glencoe’s current boss Andy Meldrum, it put a lot of things in perspective. “Listening to stories of how it took two weeks of work by willing volunteers to move a gearbox up the hill inch by inch, made me realise just how lucky we are now with all the modern equipment we have,” he said.

“One thing that has not changed at Glencoe, though, is the spirit and energy that means customers will grab a shovel and help dig out lifts in the morning. That pioneering spirit is still alive and well.”

The going’s good in Scotland right now, so if you’ve been thinking about heading for the hills then now’s your chance. Visit Winter Highland for the latest forecasts. 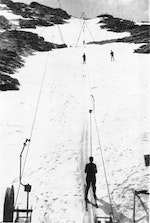