Photos by Andrew Jay
FBBB recently headed to Holland for their annual mash-up jam sesh at the Landgraaf SnowWorld dome. The set-up was sick, and so was the riding, (as this highlights video shows). FBBB’s main-man Mikee sent us this report.

This progression session was like no other, purely because it was in a dome 5 times the size of what were usually accustomed to and the fact the standards were way way higher! You only have to watch the video to know what were talking about. Stand outs for the Dutch were Sascha Wauff (hard decision not giving rider of the night to him!) showing serious steez on the kickers after 8 months out injured. Corked cab 5’s & 7’s and some nice wildcat backflips set the tone on the kickers. David Van Gessel had his swagger back after a good year or so out from knee surgery, so was good to see him back on his board.

Kas Lemmens took ‘Rider of the night’ (well deserved) with some great consistency and diverse shredding throughout. Back 3 on hardway, front 1 on nose press cab 3 out and corked back 7’s were just some of the tricks he was stompin! 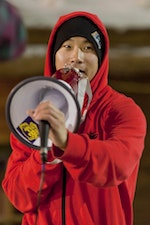 The UK’s very own Emily Willams bagged the female ‘Rider of the Night’ out of the 3 ladies that were shreddin. One of the girls, Vivianne Vluggen, had to be taken to hospital with a slipped disc in her lower spine. OUCH! We wish Vivianne a speedy recovery! Gazza Andrews was in fine form as ever with steezy back 3 & 5 nose grabs on the kickers, sweet back tails and half cab front 3 out in the rail jam that was off the hook. Neil Campbell also held his own with a variation of 270-ons and a 1 footed boardslide during the rail jam. One snowboarder takes on the world in a kind of A-Team meets Rocky meets Nacho Libre script... with a bit of banging riding thrown in.

Forum team riders Daniel Ek and John Jackson go up in smoke at the SnowWorld indoor slope in Landgraaf, Holland