Why We Chose The Bataleon Goliath Plus: As Kanye said ‘harder, better, faster, stronger’. David doesn’t stand a fucking chance.

The crew at Bataleon opened Pandora’s Box when they gave the Party Wave the ‘Plus’ treatment a couple of years back, and now here we are with everyone’s favourite all-mountain snowboard powerhouse pumped full of carbon with a sexy new monochrome paint job to seal the deal.

It’s the Goliath Plus, so obviously it’s leaner, meaner and faster but you’ll find the same versatile shape, 3D shaping and adaptable profile as you do in the regular Goliath.

Who Is The Bataleon Goliath Plus For?

You may have been a fan of the original Goliath, but there’s no need to have sampled that one to appreciate what’s on offer here. This is a true all-mountain offering and, despite bearing the Plus moniker, the barrier for entry isn’t impossibly high. Intermediates all the way up to pro team rippers can get on board with this (literally).

Directional Twin can mean a lot of different things, but for the Goliath Plus, you’ll find a true twin in every regard except for a smidge of extra volume in the nose. Obviously, this is great for riding switch and honing your freestyle skills and you’ll get that slight extra dose of stability and float when you ride it with your best foot forward.

All Bataleon boards employ a camber of some form and, as is well known fact, it’s king when it comes to pop, power and precision. But traditional camber does have its drawbacks, and that’s where 3BT and Sidekick come into play. Uplifts in the nose and tail help to negate the issues that can be found on other cambered boards, making it more forgiving around the contact points. The results are a million-fold: better float in powder, more stability to smash through chop and slop and smoother in and out of turns, to name a few.

“The ‘Plus’ symbol obviously means there’s gonna be some clever engineering here, and, of course, a helluva lotta carbon”

Once you unpack the ingredients this thing’s cooking with you’ll soon begin to justify the price difference between the OG Goliath and the Plus. But this is also where we found the Goliath Plus to really excel. It’s been pumped full of some of the best Bataleon have to offer, but it’s not a wildly unmanageable snowboard for the average rider.

Instead of making it a super stiff cannon, the bods at Bataleon have focused on making it a more comfortable, faster and more reactive ride. Less effort, more response. Or, put another way — win:win.

The ‘Plus’ symbol obviously means there’s gonna be some clever engineering here, and, of course, a helluva lotta carbon. The carbon stringers that the OG Goliath uses have been extended further into the nose and tail and you’ll find three hollow carbon tubes running lengthwise down either edge. These increase the edge hold and performance through turns, whilst adding some explosive pop through the entire length of the board, without compromising on weight.

Additionally, the Goliath Plus uses a needle pushing sintered base, a super lightweight blend of wood in the core and Bataleon’s new AirRide tech to keep you speedy, poppy and damp no matter the terrain or conditions.

“So, why make the leap and buy the Goliath Plus? The same reason you’d buy any luxury item, because you’re not afraid to spend a little more to get the best”

If you’ve ridden the Goliath before, you’ll know it’s about as versatile as they come, a board you can pull out the locker on pretty much any day of the season and still be guaranteed to have a blast.

So, why make the leap and buy the Goliath Plus? The same reason you’d buy any luxury item, because you’re not afraid to spend a little more to get the best. This probably isn’t for everyone, the price alone makes sure of that, but if you’ve got a little extra cash burning a hole in your pocket then you’ll find a premium all-mountain playmate here. 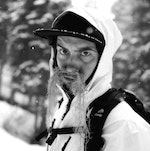 “D’you know, I think the first board I owned that wasn’t a rental, a hand-me-down, or a bargain find at the legendary ‘Cairngorm Ski Club Sale’ was the Bataleon Goliath. No doubt the decision was made as a result of trawling through the pages of the Whitelines Buyers’ Guide too!

As a result, I always feel a bit of nostalgia when strapping into one whenever I’m at a test event. The Goliath Plus is different though. Yes, it’s the same shape and profile, but you can just feel how much lighter, faster and more reactive that core is.

If you removed Triple Base from the equation, I actually think it’d be overkill for an all mountain snowboard. This kind of construction mixed with a full camber profile would be running into Jones Aviator 2.0 territory and really just a board for advanced level riders. But that easy going, forgiving feel that is so key to Bataleon’s character is ever present.

It’s for this reason that the Goliath Plus genuinely covers the spectrum of an intermediate to advanced level board, and, no surprises, it’ll suitably deliver everywhere on the mountain. You’ll just need to justify parting with the extra cash…”

“We took the acclaimed Bataleon Goliath and gave it the high-end treatment. Every part of this board has been upgraded from the woodcore to the base. It’s lighter, faster and better equipped for all-mountain freestyle riders who need more from their equipment. We wanted to build on almost 20 years of proven performance and offer people a board they knew they could count on in a premium version. If you’re looking for a surperior all-mountain board, the Goliath Plus is the board for you.”