Why we chose the Amplid Pentaquark Snowboard: Life on the edge doesn’t come faster, smoother and downright bonkers than this.

Amplid founder, Peter Bauer, described his fifteen-year career in snowboard design as the pursuit of the equilibrium between the creative, right side of the brain, and the mathematical left side. In the case of the Pentaquark, it might be the closest he’s come to finding it yet. This is a carving man’s carving board: power; performance; precision; perfection.

The Pentaquark sits among a series of three boards in what Amplid call their ‘Centrifugal Collection’. Everything about it screams high-speed, high-angle riding on the line. It features a fully positive camber and reinforced with carbon stringers in the tail. While it won’t be a forgiving or intuitive ride for many snowboarders – and essentially comes with a ‘minimum entry requirement’ – for those who’ve been honing the craft of turning for years, even decades, this is your ticket into the big leagues.

“For those who’ve been honing the craft of turning for years, even decades, this is your ticket into the big leagues”

With a Sintered 7 HD Base, speed may not just be your best friend on the mountain, but your only friend. Beating the Pentaquark down the hill with anything short of a teleporter will be a tall order. Prepare to spend some lonely minutes in the lift queue, wondering where your mates went.

A board built for these kinds of speeds is more than likely to encounter its fair share of chatter and vibration. ‘Hexo2’ replaces the wood in the nose and tail with a recycled paper honeycomb structure, to reduce the overall swing weight and dampen the overall ride.

However, this is secondary to Amplid’s real star of the show – ‘Antiphase’. The technology involves phrases like ‘unidirectional carbon fibre’ and ‘Non-Newtonian polymer sandwich’. All you need to know is that after two years in the making it works a bit like your noise-cancelling headphones, and results in a completely unflappable snowboard; even under pressure. If your last board was England on penalty shoot-outs, the Pentaquark is Roger Federer at match point.

“If your last board was England on penalty shoot-outs, the Pentaquark is Roger Federer at match point”

The ‘Centrifugal Collection’ came out of Bauer’s desire to buck the trend of outlandish, limited use, freeride shapes and bring a unique product to the market for the majority of days spent surfing the corduroy.

Is it a strap-and-go cruiser to take you between coffee and snack stops? Of course not. But who buys a Lamborghini for its ease of handling? This is something truly special, built for the groomers and tailored to a certain kind of rider. In the hands of the wrong operator, it could be a disaster waiting to happen; in the hands of the right one, it will be a thing of beauty.

“I’m no lycra-clad speed demon by any means, but stepping onto the Amplid Pentaquark is like boarding a Japanese bullet train: lightning fast laps made accessible to even your average Joe snowboarder.

The beauty of this board is that it manages to make you feel completely comfortable and in control with silly amounts of acceleration. The antiphase dampening lets you rail through even choppy piste without feeling every divot, meaning this particular carver isn’t just limited to early morning corduroy. That lack of rattle underfoot also means you get the benefits of a stiff deck with a feel that’s far more springy in turns and less twitchy than traditional chargers.

All this makes for an uncanny sensation when you end up at the head of the pack, without feeling like you’ve really hit the accelerator. This thing will have you breaking the sound barrier before you break a sweat.” 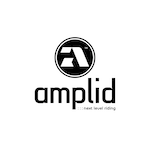 “I first came up with the Antiphase Absorbtion System, which I had developed in a different board. Next step in my mind was: This is so sick, I need to create a hauling-ass board, to really benefit from the stability this system adds to a snowboard. A board no speed junky could find on the market. So far. Now there is one.”