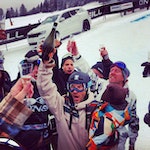 Gian Simmen officially bowed out of competitive snowboarding at the O’Neill Evolution in Davos, Switzerland this past weekend. Gian won his very first contest in Davos back in 1996 and went on to famously triumph at the very first Olympic halfpipe competition in Nagano, 1998. Fast forward to 2013 and Gian has competed at three Olympic games, won two world championships as well as countless other contests in between. As a connoisseur of style and one of the true greats in halfpipe riding it was only fitting that a legends session be held in honour of his long and successful career. Riders such as Reto Lamm, Xavier Hoffman and many more turned up for the session, which was marked by by the kind of huge straight airs and stylish grabs that Gian was well known for when he first started competing. That’s not to say that Gian isn’t able to put down a solid run by today’s standards. In the pipe comp proper, Gian stomped a run that consisted of a backside 5, a frontside 7, a cab 7, a front 9 and a massive backside air which had him finish in sixth place, with Jan Scherrer taking the win with a run that included 900’s and 1080’s. Emotions were high, spirits were higher and it all looked like a fantastic way to sign off on a truly remarkable career:

Snowboarding has given me so much: the friends, the experiences, the chance to live a very special lifestyle – it gave me a place to clear my mind. As the first rider to win Olympic Gold almost 15 years ago, I understood very quickly there would be certain expectations of me. I just hope people remember me for the work I’ve done for snowboarding, the work I still plan to do, and hope they enjoyed my riding and riding with me over the years. I can’t thank everyone enough for this amazing journey.

Thanks for the memories Gian and may you continue to shred until your body lets you shred no more!

Download this sun-saturated snowboard shot for you computer's background.

First pictures and reviews of the new snowboards, boots, bindings, clothing, goggles and accessories for the winter 2013-2014 season

Download this sun-saturated snowboard shot for you computer's background.

First pictures and reviews of the new snowboards, boots, bindings, clothing, goggles and accessories for the winter 2013-2014 season

6 people, including 5 children admitted to hospital with non-life-threatening injuries.

Nike Snowboarding in Chile
We use cookies on our website to give you the most relevant experience by remembering your preferences and repeat visits. By clicking “Accept All”, you consent to the use of ALL the cookies. However, you may visit "Cookie Settings" to provide a controlled consent.
Cookie SettingsAccept All
Manage consent