What can we say about Bryan Iguchi that hasn’t already been said? He’s the kind of snowboarder that even those with no prior knowledge or even affinity with the sport can delight in watching. Elegantly drawn out turns, death defying terrain and a passion so evident it can be spotted a mile off.

Much of what we’re saying is undoubtedly cliché, and it might even come across as disingenuous, but when referring to Bryan Iguchi we feel that you’re given carte blanche to use words like ‘legend’ and ‘iconic’, and, in fact, it would be nothing short of a disservice not to.

There aren’t many riders who’ve managed to have careers spanning multiple decades, especially not ones who dropped off the competitive circuit and out of the public eye for several years. No mean feat considering the fast-paced social media heavy world we live in, where the next big thing is yesterday’s news by the time you’ve scrolled through your feed.

A stronghold of old-school riding and values, Iguchi has been with the sport from its early germination with its punk rock anti-establishment roots, and has watched it bloom into the global phenomenon it is today. Although fame and fortune haven’t been the driving forces behind Guch’s career, he’s arguably more successful now than he was in his international circuit heyday. Like many riders before him Iguchi made the move from competitive freestyle to the backcountry, completely ditching the glitz and glam of podium life to pursue his passion for out of bounds exploration.

Bryan Iguchi: “My first real backcountry experience was while filming with Volcom for “Alive We Ride”. At the time we had only been filming at resorts. We were on our way from Mammoth to Tahoe and decided to take a left turn on a high mountain pass in the middle of nowhere. At the end of the road we found a jump feature a short hike from where we parked. We got a session going and it was super fun. We had a really good day filming and decided to skip going to Tahoe, got a hotel and spent the rest of the trip out there. We returned the next spring with the crew and camped out and filmed the end segment for “The Garden”… still to this day my most memorable project. I guess you can say seeking ‘garden vibes’ has been the theme for my backcountry pursuits.”

Bryan Iguchi is simultaneously super relatable and wildly untouchable. Watching the latest wunderkind throwing down a clean quad is amazing for sure, it’s an incredible feat of athleticism and skill but it’s so far out of the realm of the average snowboarder that it’s almost lost on us. Seeing Guch painting lines down a clean face is something altogether different, we’re able to almost put ourselves in his shoes and imagine doing the same, albeit much worse and much, much slower. His stoke is contagious and despite the fact that he’s one of the best snowboarders in the world, you’re still able to feel connected to his riding.

BI: “Things have evolved, technology has improved, and the tricks kids are doing have become mind-blowing stunts for sure… But I believe the fundamental experience remains relatively the same. You go out with friends, get a session going and have fun… It’s a timeless pursuit.”

A slew of pro model products, from snowboards to socks and everything in between, Bryan Iguchi knows full well that choosing the right gear can really be a life and death decision. Nights spent lost on the trail, splitboard missions into the unknown and first lines on some of the world’s most unforgiving terrain are all in a day’s (night’s?) work for Guch.

He works alongside some of the biggest names in the industry; Vans, Volcom, Arbor and Smartwool all have products bearing the Iguchi moniker. Working extensively to ensure their products can handle everything he throws their way Smartwool started from the ground up with their Guch collection. This year sees a Merino 250 Crew Baselayer, Merino 250 ¼ Zip Baselayer, Merino 250 Balaclava, Merino Sport 150 Graphic Tee, Logo Beanie and Vans x Smartwool PhD Iguchi socks.

Merino is an ideal fabric for temperature regulation, it’s incredibly porous and breathable, and works to wick sweat away from your skin. The fibres function independently by crimping in on themselves when it’s cold, sealing heat inside, and opening out to allow for increased airflow when it’s warmer.

BI: “Having the right gear set up for conditions can make things a lot more enjoyable… being cold and wet in the mountains is pretty miserable. All essential gear works together and is necessary and carries equal importance.”

Iguchi doesn’t just give his input on the technical side of things; his artwork also makes an appearance on a lot of his line. With artistic mountain scenes that are almost as recognisable as his big mountain riding style, Iguchi draws upon his experiences and connection with nature to create these visuals.

BI: “I use watercolours and paint pens when I’m on the road, when I’m at home (and I can make a mess) I’ll use fluid acrylics, alcohol ink, spray paint and paint pens…”

Snowboarding, at its core, is an unusual sport, for the vast majority of us it’s just a hobby or a recreational pastime but for those at the very top level it can be a cutthroat environment, with riders vying for sponsorship deals and podium finishes. Interestingly, despite the undoubtedly fierce competition of some, there’s a great many professional snowboarders who choose to eschew this competitive spirit and are happy to mentor others, passing on their knowledge to the next generation. After a young Travis Rice threw down that HUGE Superpark rodeo and started down the path of global stardom he was quickly taken under the wing of grizzled mountain man, Bryan Iguchi. More recently Jackson’s own Blake Paul has felt the fatherly hand of Iguchi guiding him through the endless backcountry and counselling him on that wily mistress Mother Nature.

But it didn’t start there, years before Iguchi showed Travis the ropes, he himself was mentored by none other than Craig Kelly. Arguably one of the most influential riders of not just this generation but of all time, Craig Kelly’s influence can still be felt almost two decades after his tragic passing.

BI: “Craig Kelly invited Terje and I to stay with him at his home and ride Baker with him… and it blew my mind. After that he brought us on backcountry trips to BC, AK and New Zealand. Through those experiences I realized that the mountains offered endless riding opportunities, but I had a lot to learn to do it safely. I didn’t really know anything about avalanches or even think about it before I met Craig. He was a true mentor and looked after us showing us what it was all about.”

Professional snowboarding might not be the most likely career choice for a guy who grew up immersed in the skate culture of sun-soaked Los Angeles, but after mastering the art on the best Cali had to offer, Iguchi felt the overwhelming call of the Teton’s and migrated to the backcountry mecca of Jackson Hole, Wyoming. More than 20 years later he still calls it home.

BI: “Life in Wyoming has been good to me… I moved here for riding and that’s been great but meeting my wife and starting a family is what’s really kept me here.” 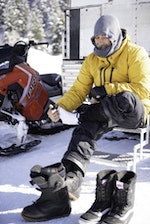 A family man through and through, Iguchi remains as humble and grounded as he’s ever been, despite taking his well-deserved place as one of snowboarding’s elite. His ideal pow day plan in Jackson?

BI: “I’m pretty mellow about it these days… I’ll try to rally the family first, but if they have work or school I’ll hit up the homies and catch a ride out to the hill and just go with the flow…or maybe set out on a backcountry mission if a plan is in place.”

And when plans are in place, you better believe they’re big ones. With a list of friends that reads like a ‘who’s who’ of snowboarding royalty, Guch is never short of a buddy to call up to tackle the next great adventure. Adventures that would have us breaking out in a cold sweat and leaving a few suspect patches in our thermals, including Grand Teton’s mythical Otter Body. One of the most serious lines in North America, the barrier for entry is insanely high, even the most accomplished riders would think twice about attempting it.

BI: “It was an amazing experience going along with Jones on an extreme mountaineering style mission. After riding it, I realized that I’m not really comfortable riding exposed lines with mandatory rappels, it’s just not my thing…I prefer riding lines that evoke feelings of joy rather than those of fear, anxiety and stress.”

Riders familiar with Corbet’s couloir will know it’s pretty gnarly, not quite Otter Body level, but still enough induce heart palpitations and a mild nausea. It’d take a few pints of dutch courage before we took the plunge, but Guch? He’d do it blindfolded. Rather than coming across as a blustering sense of bravado, Iguchi speaks with the calmly assured wherewithal of a man who knows his limits but is also acutely aware of his talents.

BI: “Most of the time I drop into it it’s dumping, and the wind is blowing so you can’t really see anyway.

The snowsports world has taken a bit of a kick in the teeth this season, with many resorts closing early in the spring, and many still uncertain when, if at all, the lifts will start spinning for the coming winter. That said, all hope is not lost, there’s sure to be a boom in those who are choosing to seek their adventures off the beaten track. While this is no doubt a good thing for the industry as a whole, it’s imperative that intrepid explorers with more gusto than experience don’t bite off more than they can chew.

“It’s the safest way to get out there and find good riding, and you can learn a lot from the experience“

A few parting words of advice from the backcountry bigwig himself BI: “I’d recommend hire a guide… it’s the safest way to get out there and find good riding, and you can learn a lot from the experience. Even better, sign up for an avalanche class… you’ll spend time in the field with professionals and learn the basics. It’s a good way to meet friends to ride backcountry with.”

Evergreen. | A Snowboard Movie By Vans

Evergreen. | A Snowboard Movie By Vans