It was only a matter of time before a figurehead turned to the dark side but we never thought that it would be Santa. Firstly, we’ve sorted out the myth of Santa. He does exist. There’s not a single chance in hell that someone would go around PRETENDING to be Santa, it just doesn’t make sense! Who in their right mind would do such a thing?

Unless……
That’s right! These dirty, bad dressed, fashion bastards have attempted to take on a kinder form to make sure that people aren’t as disgusted as they currently are! These low cretins are recruiting kids as they are easily approached by Santa. Be aware everyone! If you see anyone dressed or looking like jolly Saint Nick, you’d best attempt to cut of his leg and maim him so he is incapacitated forevermore. There will be no more Christmas from now on as you can only expect fashion disaster propaganda and some sort of onesie in the form of defecation. 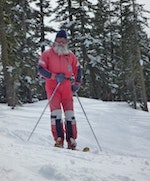 It's actually a picture taken quite recently of someone that thinks they should don the 'Gaddafi hat'.

Where to begin, where to begin?! America isn’t the most loved of countries at the moment and this isn’t going to do them any favours! The...

It's actually a picture taken quite recently of someone that thinks they should don the 'Gaddafi hat'.

Where to begin, where to begin?! America isn’t the most loved of countries at the moment and this isn’t going to do them any favours! The...

They’re getting smarter. I knew they would! We have to be on our guard here people! There’s been a few signs of the fashion extremists becoming...

Camouflaged predators
We use cookies on our website to give you the most relevant experience by remembering your preferences and repeat visits. By clicking “Accept All”, you consent to the use of ALL the cookies. However, you may visit "Cookie Settings" to provide a controlled consent.
Cookie SettingsAccept All
Manage consent