The end of the season has definitely been and gone and it’s about time that we had our Top 5 of the season. It was a tough decision but we managed to make it, for the greater good.

It’s getting towards the end of the season and I think I’m running out of ways to mock people in one pieces. It’s got nothing to do with the fact that this guy is officially the Godfather of one pieces. He looks delightful in his 50 colour outfit and definitely doesn’t appear stupid in the slightest. His cigar shows that he means business and the lump by his crotch no way indicates that he might be happy to see someone (it could be a gun).
This is the best thing I’ve ever seen. Please don’t whack me. 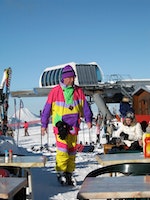 Nestled in the bustling scenery of Les Gets is the lesser spotted 80’s one piece with matching hair-do. Now try not to startle it everyone, it’s sure to run away if we make a loud noise. The best way to view these creatures is through cross hairs shortly before a trigger of some sort is pulled. Worringly enough, they’ve started breeding. Look at the little tyke down there. That poor bastard doesn’t have a chance of a normal life and there’s nothing we can do about it. Unless… unless we end his suffering now?

But we couldn’t though could we? No?

I never thought that one day I would be lost for words. Not because it’s so hideous but because this poor old dear has been left subject to a prank at the hands of the Fashion Police.

Along with the usual case of ‘spread ’em Ma’am’, these officers (now reprimanded) left the lady with her face firmly pressed up against the concrete wall to parade the disgusting outfit on show. The thing is that she’s been there for about 40 years or so her outfit would lead us to believe!

My god, it’s a bloody awful piece of attire. Surely there’s benefits for this type of thing. Y’know, spend your heating allowance on something new sweetheart. Either that or let’s get you back in the nursing home where you can reminisce about when Churchill shook your hand.

Honestly! If you were with a bunch of your mates on a stag do it’s understandable attire, but this fashion victim is on his lonesome. Not only that but he’s on blades. So if you look at the elements in this disaster it’s not going well already. He also looks like he’s just come out of his Year 8 PE class! There must have been some point in his morning where he thought, “actually I don’t know if this is the look I’m going for but it’s not far off.” It’s as if all logic escaped his mind for (I was going to put spilt second but that ain’t true!) a good week at least! Not only that, but look at where he is: “Plan de l’Homme”. Literally translated as ‘man plateau’. Man plateau indeed, snow-blader.

That’s enough ranting. Truth be told, we all had a good laugh about this picture.

Yes, it’s the classic saying for when something is awkward. It certainly isn’t this man who’s feeling awkward. What does he have on his head?!
His kid must be dying inside! To go skiing with your family where your father insists on wearing a piss poor one-piece is one thing, but for him to wear an elephant on his head?! Awful

Sorry little one. There’s no saving you. As you for you ‘father’, I’m calling social services

That’s it. That’s all. See you next season!

Look at this one. It was sent in very recently from the snowy hills of Banff and it’s scary. The creature in the background has...

There’s times where I wish magic were real. Unfortunately it isn’t, so we’ll have to resort to a good old murder. OK, maybe not that...

Look at this one. It was sent in very recently from the snowy hills of Banff and it’s scary. The creature in the background has...

There’s times where I wish magic were real. Unfortunately it isn’t, so we’ll have to resort to a good old murder. OK, maybe not that...

It’s not just skiers that have worn the one piece with pride. God knows why it’s with pride but it is… f*cking idiots. Anyway, this...

Nestled in the bustling scenery of Les Gets is the lesser spotted 80’s one piece with matching hair-do. Now try not to startle it everyone,...