The return of the Westbeach Snowflex Freestyle Series on Saturday officially kicked off this year’s competition circuit. The highly anticipated series see the cream of UK snowboarding make their mark on some of the best Snowflex slopes around.

The first of these to get the Westbeach treatment was the mecca of all dryslopes, Halifax Ski and Snowboard Centre. Although widely considered home to the best Snowflex kicker in the land, a trip to ‘Fax wouldn’t be the same without gale force winds blasting riders across the Pennines, and this year was no exception. Nevertheless, the weather didn’t dampen sprits and the competition was soon underway. 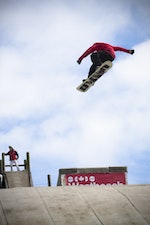 With a relaxed jam format for the qualifier, riders were able to continuously push the standard higher without the pressure of only two runs, and it wasn’t long before the local lad Andy Nudds stomped his super relaxed (almost asleep!) backside 9. Some say he naturally faces magnetic north and that his legs are hydraulic… all we know is, he’s called Nuddsy – and he’s a postman!

Having set the standard, it was up to other standout riders such as Colum Mytton, Danny McCormick and Matthew MacWhirter to open their suitcase of tricks and try to match it. The crowd were treated to the steeziest of switch underflips, backside rodeo 5’s and plenty of switch back 5’s – none of which would have looked out of place on the international circuit.

With the over-16 qualifiers at an end, it was up to the young guns to unleash their talent. All fifteen riders were in contention for the final, so there was no holding back. Pete Meadows, one of many to venture down from Scotland, kicked it all off with some of the most stylish back 5’s to be seen south of the border. Fellow Scot Matt McCormick (just 14-years-old) was right behind him, stomping some equally impressive back 7’s. Another newcomer taking a firm hold on the UK scene is Rowan Coultas. Although he’s technically only been snowboarding for a short while, Rowan’s spent more hours on his board than most, and it is definitely paying off; it was good to see this dome regular bring some huge and technical tricks to the Snowflex kicker.

The top three riders in each category progressed to a two run, ‘best run counts’ super final. This change in format made it even more important for riders to stomp their tricks consistently, and it was Andy Nudds who grabbed first place in the men’s with another perfect 9. Danny McCormick took second with a switch back 5 double grab, while thrid place went to Colum Mytton for his super stylish front 7.

In the Under 16s, Matt McCormick snatched first by stomping a back 7, with Pete Meadows in second and Rowan Coultas taking a well-deserved third. 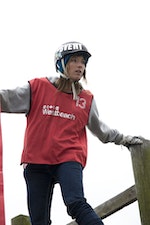 The Ladies competition was equally epic. There are a growing number of female competitors appearing on the scene, which made for a close final, but it was Faye Young who took 1st place in the Under 16s with her unrivalled style, while Sophie Addison won the Over 16s (and a stack of prizes) by stomping a huge back 3.

As well as showing how good UK snowboarding has become, the Halifax event attracted a number of other riders whose potential bodes well for the future. Dome regular Lucy Prior was on Snowflex for the first time, and it isn’t going to be an experience she forgets soon. Lucy took ‘best slam’ after catching her toe edge on the lip of the kicker – resulting in a fully laid out front flip to rag doll!

Not being put off, she continued to hit the kicker for the rest of the day. Respect. Another standout was Simon Cudlip; the Castleford local used the signature whippy kicker to his advantage by throwing down a double front flip, clean as a whistle, to bag ‘sickest trick of the day’.

With over 50 skiers and snowboarders in attendance, the first leg of the Westbeach Snowflex Freestyle Series proved hugely successful and has definitely set the bar extremely high. Next stop is Aberdeen on Saturday 18th September.

A big thanks go out to the organisers; Sue Garlick, Wayne Taylor, Debs Yeadon and AKA Snowskate, and to all the sponsors who helped make the day such a banger. See who your money really goes to

Skate Rats, Snow Brats and the History of Freestyle

See who your money really goes to

Skate Rats, Snow Brats and the History of Freestyle

First time on dryslope in over a year

So they might have colonised Shepherd's Bush, but Aussie shredders have a lot in common with us...

Australian Snowboard Spolight - Andy Lloyd
We use cookies on our website to give you the most relevant experience by remembering your preferences and repeat visits. By clicking “Accept All”, you consent to the use of ALL the cookies. However, you may visit "Cookie Settings" to provide a controlled consent.
Cookie SettingsAccept All
Manage consent