The Scottish Freestyle Championships 2013 seen over 60 competitors gather at Cairngorm Mountain in the mighty Strathspey valley to battle it out to be titled Scottish Champions. There was a great turn out from all over Scotland with the usual Aberdeen, Glasgow,  Edinburgh and local Cairngorm snowboard club crew representing, not to mention the few that travelled over the boarder from England to give us Scots a run for our money.

The park set up was the best Snowsport Scotland has ever had for its Scottish Freestyle Championships and the positive feedback and buzz off the riders was great, quoting Matt McCormick it was “the best park I’ve ever ridden up up the Gorm” so we can only thank Adam McInnes for all his hard work in his 600 winch Cat and Cairngorm for allowing the build time to create something that was going to facilitate everyone. Also to locals Ed Greig, Livi, Angus and CML liftys for giving it the final hand shape and seal of approval.

The format for the event was a two run best run qualifier into an originally planned top 8 male and top 6 female jam final, however inevitably the Scottish weather brought the “Clag”.  This slowed up the running order which meant we had to speed up proceedings in the afternoon therefore the final was changed to a 2 run best run counts format. 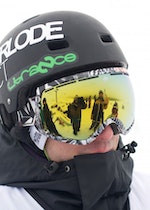 The standard as expected was high, in womens snowboarding Vaila Chapman was the one to beat again, her hard work ethic is paying off as she stomped a front 5 off her toes in the finals and smooth switch fs 90 to 90 out on the 9m Quicksilver ledge claiming her gold. Abbie Dorward from Aberdeen sent some nice nose grabs and got board slides on the boxes to take silver and Emma Swanson 9 also from Aberdeen took 3rd place and is defiantly one to watch for the future as she doesn’t seem to be scared of much!

In male Snowboarding big steazy 3’s 5’s 7’s and 9’s where being thrown down. Tomski Robison took the U12’s title with a nice classic method off the big kicker in one of his runs, in the U16’s Fin Bremner took gold but was also crowned overall champion with a back 9 double tail tweek helping to seal the deal, Matt McCormick was chasing him down with his FS 7’s and cab 9 but unfortunately didn’t land his run in the finals. Mark Ruparelia took the over 16 mens title with Angus Trinder close behind getting some steezy boardslides 270 outs and big back to back 3’s.

The overall Champions took home some banging crystal wear which will no doubt sit proudly on mantle pieces until next year.

Thanks again to Cairngorm Mountain team for all their hard work, to all the volunteers who helped make the day such a success, to all the judges and local DJ Bret aka The Wook and to everyone who showed up and supported the Scene – we look forward to seeing you again for in indoor championships at Snowfactor in May.

Photos and report from the weekend's action in Scotland

A rookie error? Or a deliberate stunt?

Watch Dan Wakeham and Ben Kilner squaring up to each other... literally!

Photos and report from the weekend's action in Scotland

A rookie error? Or a deliberate stunt?

Watch Dan Wakeham and Ben Kilner squaring up to each other... literally!

Altitude Festival 2013 - review & photos
We use cookies on our website to give you the most relevant experience by remembering your preferences and repeat visits. By clicking “Accept All”, you consent to the use of ALL the cookies. However, you may visit "Cookie Settings" to provide a controlled consent.
Cookie SettingsAccept All
Manage consent