The Nike 6.0 Stairset Battle produced some of the finest jibbing the UK has ever seen last Friday in Castleford. Whitelines’ James Box was there to witness all the action, and sent us this report. Hit more to read it, and scroll down to see the video highlights.

The highly-anticipated competition was based around a new concept in which riders were asked to vote for their favourite slope; Braehead, Castleford or Milton Keynes. The overall favourite would host the UK leg of Nike 6.0’s Stairset Battle. After weeks of rallying around support and making ‘vote for us’ edits, it was Castleford who stormed ahead with over 40% of the vote, resulting in Cas-Vegas having the opportunity to set the standard in the first of the Nike 6.0 Stairset Battles and keep the stairset as a permanent weekly feature! 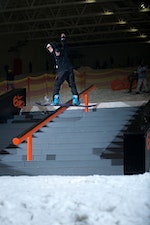 With photos of the railset being built floating around on Facebook, the hype increased about what many (correctly as it turned out) guessed was going be the best rail competition to take place in the UK. As riders started to arrive everyone knew it was going to be a tightly contested event, with 40 of the top rail riders in attendance of which many are considered world class on rails. It was sure to go off.

The atmosphere was a true reflection of the UK scene; having fun whilst pushing the standard from amazing to world class. This was partly due to the riders who had turned up, but also a result of the set-up which Damian Doyle and friends had worked endlessly into the night to create. Not only was the perfectly shaped stariset taking centre stage, a full park was also available for everyone to shred whilst waiting for the competition to start.

As it all kicked off with the sounds of the on slope DJ and Henry Jackson on the mic, the strong field of riders had 90 minutes to impress the judges, with the top 10 riders going head to head in the TTR 2 Star final. If you thought with a rail feature such as this the riders would take it steady for a few runs, you couldn’t be further from the truth. First rider up, Cas local Jonny Russell, switch 270 on. And the standard only increased.

With the rail wizardry going from technical to unrecognisable, it was Tom Guilmard, Gareth Andrews, Simon Foster, Will Smith, Jonny Russell Andy Nudds, Oliver Dutton, Neil Campbell, Oliver Waters and Marc McClement who made it through as the standout riders. This will have been one of the hardest decisions for the judges to make, as the riding was outstanding. Marc McClement and his skin tight BawBags did Scotland proud by throwing himself down the stairs on more than one occasion, and also numerous attempts at a cheeky back 450 on. Another rider to push the standard was Ian ThrAshmore, after a week of shredding the rails of Leeds City centre, ThrAshmore opted to gap the whole set including the rails, with a perfect back 180 to flat.

After a quick reshape, it was the final which made it a night to remember and not just because it was before the drinks courtesy of Nike 6.0 started to flow. With the rest of the slope shut and spectators in close to the action, it was time to battle it out for a podium place. The judges were looking for the best two tricks from each person with the top 3 taking the well deserved prizes. World class riding was witnessed from Will Smith, Andy Nudds, Simon Foster, Oliver Dutton, Neil Campbell and Oliver Waters, but it was Gareth Andrews, Jonny Russell and Lil T who impressed the judges with consistent and technical riding.

Gareth Andrews took 3rd place walking away with £125 cash and a pair of Nike ID trainers, for a perfect frontside 270 to 270 off on the down bar. Jonny Russell hit the bar with £250 cash, a pair Nike ID trainers and a full Nike 6.0 outerwear for stomping a hardway 270 on to the kink box and a switch 270 backlip onto the down bar.

But it was Milton Keynes local Lil T ( Tom Guilmard ) who proved why he is one of best rail riders in UK, by stomping a front 3 on and a front blunt 450 off, and consequently taking 1st place- winning a golden ticket and an all inclusive trip to the Nike 6.0 Stairset Battle final, at the prestigious Air and Style 2011 in Munich!

MC Henry Jackson even announced that with the standard being so high he thought whoever ended winning this event, would probably end up winning the overall final in Europe too. No pressure then Lil T! So as the breathtaking event came to an end it was time to hit the Cas-Vegas bar for the Nike 6.0 after party and reflect on what was sure to be remembered as the best rail event to be held on these shores. Scene is dead? – My arse.

Stoked. Literally the only emotion that this video makes you feel is stoked. The Absinthe Flipside series is always a fan favourite and this latest...

The first two parts of a new blog by Nick J, the chalet boy who's old enough to know better...

You have to watch Burton's new prospect, he's sick!

Stoked. Literally the only emotion that this video makes you feel is stoked. The Absinthe Flipside series is always a fan favourite and this latest...

The first two parts of a new blog by Nick J, the chalet boy who's old enough to know better...

You have to watch Burton's new prospect, he's sick!

Halldor Helgason tells it how it is

Halldor Helgason tells it how it is

Top 10 Snowboard Videos of 2010
We use cookies on our website to give you the most relevant experience by remembering your preferences and repeat visits. By clicking “Accept All”, you consent to the use of ALL the cookies. However, you may visit "Cookie Settings" to provide a controlled consent.
Cookie SettingsAccept All
Manage consent