Switzerland – when you think of winter holidays in Europe’s private banking capital you’re more likely to think of caviar and truffle pizzas in Verbier than value for money. However, in a bid to get more bodies on some of the smaller Swiss ski resorts, 25 of them have united to create the Magic Pass, one card that lets you ride the following hills from the 1st November until the 30th April for just 349CHF (£274): 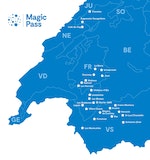 Whilst it doesn’t include the more famous Swiss stations like Laax or the Four Valleys, for less than the cost of a six-day pass in one of those areas you can get exploring anytime in the season. It’s even good value compared to France or Austria – a week riding in the Portes Du Soleil will set you back just a little less than a whole winter of Swiss gems!

What do you reckon? Will you try something different next year and try out a Swiss road trip?

The Harbin region gets ready to launch a fully kitted-out indoor mini resort.

UPDATE: Future of PowdAir in doubt after investor backs out

Mark McMorris Recovering from Serious Injury in Whistler, BC

Mark McMorris Recovering from Serious Injury in Whistler, BC
We use cookies on our website to give you the most relevant experience by remembering your preferences and repeat visits. By clicking “Accept All”, you consent to the use of ALL the cookies. However, you may visit "Cookie Settings" to provide a controlled consent.
Cookie SettingsAccept All
Manage consent