The line-up for the Groove Festival, taking place in Aviemore next March, has been announced – and it’s epic. 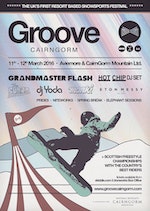 Grandmaster Flash, DJ Yoda, the Cuban Brothers and a Hot Chip DJ set are among the acts already confirmed, with more to be announced soon.

They’ve got on-hill entertainment taken care off too – the festival weekend coincides with the Scottish Freestyle Championships, so expect the park to be awash with sickery all day before things get going down in Aviemore at night.

Head to the Groove website to get your tickets now – earlybird deals are already gone, but there’s plenty of options still up for grabs!

Marko Grilc and Wojtek Pawlusiak get involved with the groms!

The Alps Are About To Get Dumped On!

First major snow of the European season due this weekend

The Alps Are About To Get Dumped On!