What a week it’s been for our finest Yorkshire export Jamie Nicholls. Hot off the heels from a third place finish (and best trick award) at the O’Neill Pleasure Jam last weekend, Jamie has only gone and continued his recent podium assault by placing second at the Burton Rail Days comp this morning. Get in maa son! 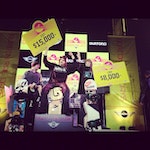 The event, which invites some of the best rail riders in the world, including Zak Hale, Ethan Deiss, Brandon Hobush, Wojtek Pawlusiak and many more to Tokyo to compete for the $15,000 first place prize was actually won by Jamie last year – being the first major international win of his career. This time around, despite qualifying for the finals in first place, Jamie wasn’t quite able to better Forest Bailey who trumped his cab 360 to switch nosepress on the down rail with a 50-50 on the closeout rail transferring to a lipslide on the down rail. In his second and third run, Jamie really cranked it up a notch, going for an insane closeout 50-50 to frontside 270 transfer to the down rail. Unfortunately he couldn’t quite stomp it but the attempt was hands down the gnarliest of the entire contest. Arguably, Jamie’s first trick was more technical and stomped more cleanly than Forest’s transfer but judging, as we all know, is a subjective and complex beast. Either way, it’s another fantastic result for our lad, and further highlights his position as a world-class force in competitive snowboarding. Jonah Owen rounded out the podium taking bronze with a 50-50 on the closeout to 360 melon.

If you missed it, you can watch the full live stream on demand here. Keep an eye out for more photo and video highlights to follow.

We delve into a world of sidecuts, anatomy and asymmetry...

Having your breath taken away by visual stimuli is something we wish happened every day...

We delve into a world of sidecuts, anatomy and asymmetry...

Having your breath taken away by visual stimuli is something we wish happened every day...

Air & Style Beijing - Cheesy Highlights Video
We use cookies on our website to give you the most relevant experience by remembering your preferences and repeat visits. By clicking “Accept All”, you consent to the use of ALL the cookies. However, you may visit "Cookie Settings" to provide a controlled consent.
Cookie SettingsAccept All
Manage consent