If you’ve just picked up the 100th issue of Whitelines, you’ll have noticed that we went to town with a special fold-out double cover. The front stars Knut Eliassen doing a textbook backside air in a snowstorm; the back features a mirror-image method from Chris Moran (albeit less fancily shot!) which we ran as our first ever cover way back in October 1995.

How did the two images get taken? Here’s the full story, from the guys who were there… 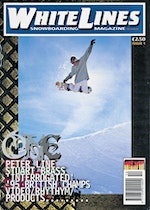 “It was the British Championships in Val d’Isère in 1995,” recalls Chris. “The thing that I remember most about that pipe was that it was built by Si Smith, Chod [the WL founding editor] and loads of people. It was late in the season and fuckin’ roasting – everyone had their tops off. All the competitors had to dig the pipe so you can imagine how shit it was. No one had built one before, though Si Smith had some vague recollection.

I can’t remember who, but someone had a tube of deep heat, and I said to Chod (who I didn’t really know at the time) ‘Your shoulders are looking really red. I’ve got some suncream here, do you want some?’ And he walked over and took his gloves off and I was like, ‘Don’t worry, I’ll put it on for you,’ and squirted this big chevron of deep heat on his shoulder blades. I made it about 20 seconds before he realised went mental. I started legging it down the pipe and he was running after me with this massive shovel in my hand – I didn’t know if he was gonna kill me! After that I started hanging out it was just really good fun. The building of the pipe was a good laugh – the actual competition was really an unimportant part of it.

That photograph, I don’t remember doing it. I look at it now and I go ‘God.’ It’s not a good representation of the standard of riding ‘cos it was actually quite high, and Ste Bailey and I were trying to put 900s down. It’s more to do with the standard of the photography at the time – it may have been one of the few in focus photos!” 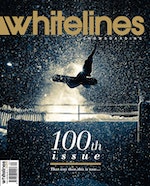 “This shot was taken just a couple of days before Christmas last season,” says photographer Lorenz Holder. “Knut and I flew to Ruka in Finland to get some lifestyle shots for the Nitro catalogue. When you’re on a trip like this, you don’t have too much time to take normal action pictures, but on this day we both had some energy left and thought we’d find something to hit at night.

Knut’s idea was to do a millerflip over the rail into a dropdown bank. When we built the set-up, the weather was clear and it was actually not very spectacular to shoot. But we gave a try anyway, just for the fun of it. About 30 minutes later it started to snow like hell and the whole scene changed dramatically. Due to the super low temperatures in Finland, the snow was super dry and falling down almost in slow motion. We were both really excited about the potential shots now.

After we got the Millerflip, I asked Knut if he could maybe do a method over the fence. After the first try, I realized that it could be a sick shot – the only problem was that he would have to position his method perfectly in front of the flash to get a white shiny silhouette around him. That’s easier said than done, and after about 10 goes we still hadn’t nailed it. Knut was a little bit over it, because it was getting colder and colder, but he agreed to do two more tries.

After those two tries, we still hadn’t got it… So I asked him to do it one more time. Knut was not stoked at all, but he gave it one more go. After I pressed the trigger, I was scared to even look on the display in case it hadn’t worked again. But this time it was exactly as I had it in mind.

I’m so stoked that Knut did it one more time and that we both got the cover of Issue 100! I guess now I owe him a beer…”

Don’t forget to vote for your favourite Whitelines cover of all time here.

Travis Rice talks about his insane new contest in Baldface, BC, which promises to be 'the future of snowboarding competitions'.

Bangers from Tahoe plus fresh footage of the Nuddsinator

Travis Rice talks about his insane new contest in Baldface, BC, which promises to be 'the future of snowboarding competitions'.

Bangers from Tahoe plus fresh footage of the Nuddsinator

O'Neill Evolution 2012 - watch the men's winning runs
We use cookies on our website to give you the most relevant experience by remembering your preferences and repeat visits. By clicking “Accept All”, you consent to the use of ALL the cookies. However, you may visit "Cookie Settings" to provide a controlled consent.
Cookie SettingsAccept All
Manage consent